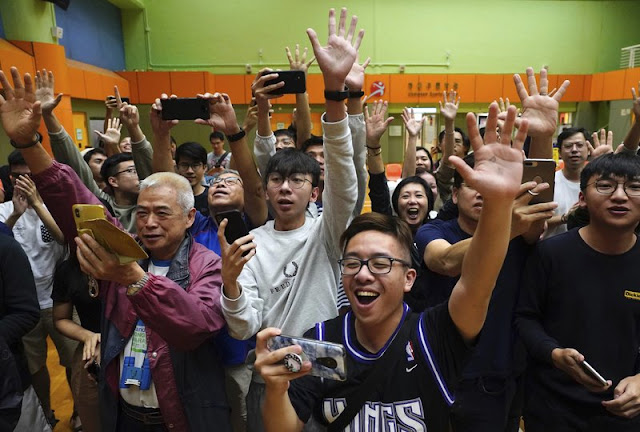 Asia News reports that in the Hong Kong district elections the pro-democracy candidates won 90 percent of seats
by Paul Wang
71.2% turnout: in 2015 it was 47%. The Democrats have won nearly 400 of the 452 seats available. Young candidates, linked to the anti-extradition movement, in the running for the first time, have trounced seasoned pro-Beijing candidates. Junius Ho defeated. Carrie Lam promises that the government will hear the voice of the people. Unity restored between pro-democracy parties and young people. March of the elected to the PolyU, where the police siege continues.

Hong Kong (AsiaNews) - Democratic candidates, opposed to the government, won 90% of the seats in the district council elections held yesterday in Hong Kong. With the count not yet officially concluded, the Democrats have won 390 of the 452 seats available; 17 of the 18 Councils are in their hands. The pro-Beijing groups took only 58 seats, losing more than 240 compared to the 2015 elections.

The participation was also impressive: out of 4.1 million registered voters, 2.94 million went to the polls: 71.2% (in 2015 they were 47%). By itself, the district councils do not have a great importance: they manage the problems of the neighborhood (bus routes, garbage, ...). In any case, the victory of the Democrats will allow them to gain more space also in the Electoral Committee that votes for the head of the executive, acquiring 117 seats (out of 1200).

The most important value of these elections is that they are a "referendum" against government policy in these six months of anti-extradition and pro-democracy demonstrations and criticism of police violence.

Most of the democratic candidates who have won the elections are close to the anti-extradition movement and while not sharing the radicals' vandalistic extremism, they support the "five demands" that characterize the movement, including the launching of an independent inquiry into the excessive use of force by the police and a clear path to universal suffrage.

Jimmy Sham, the activist in charge of the Civil Front for Human Rights - a group that has organized the most numerous marches in recent months - has won despite being in the running for the first time. Jimmy Sham had also been attacked by anti-democratic groups leaving him bleeding on the ground. Even Andrew Chiu Ka-yin, who was bitten in the ear by a pro-China supporter, won.

The government and pro-Beijing parties had hoped that the elections would bring out a "silent majority" that was the enemy of the demonstrations and the demands of the movement. Instead, in many districts, young demonstrators running for the first time in the elections defeated seasoned members of the establishment.

One of the most bitter defeats is that of Junius Ho, pro-Beijing parliamentarian, accused of supporting the beating of young demonstrators by mafia groups in Yuen Long last July.

Activist Joshua Wong had been banned from competing as a candidate, accused of supporting Hong Kong's independence (which he denied). The pro-democracy candidate who replaced him won hands down.

Executive chief Carrie Lam acknowledged that the results show voters' disappointment with current social conditions and long-standing problems. She has promised that the government will hear the message of the people.

Looking at the results of this "referendum" against her policy, many people advise her to resign.

These elections show a regained unity between the pro-democracy parties and the young, which faltered in the last legislative elections, when the young people accused the parties of being "ineffective". A sign of this unity is the decision of some of the winners to march this afternoon to the Polytechnic where there are still dozens of young people besieged by the police. The president of the democratic party Wu Chi-wai said that ending the police siege of the PolyU is the first of their tasks.
Full Text Source: Asia News IT - Image Source: Google Images AP
Posted by Jesus Caritas Est at 9:24 AM