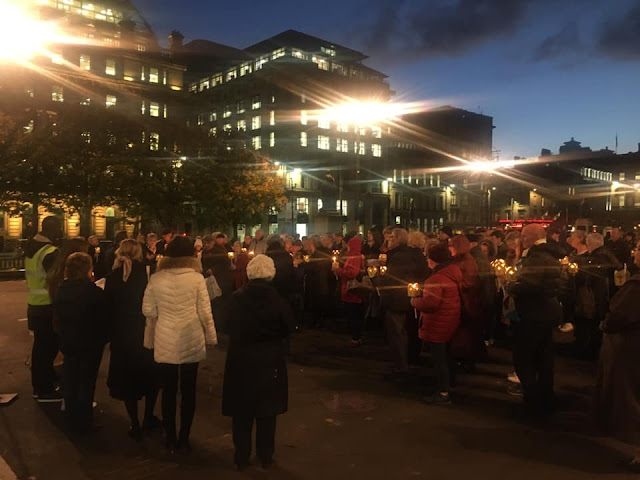 The Torchlight Procession is a mark of remembrance and respect for those lives lost and hurt by abortion. Pro-Lifers gathered in George Square, Glasgow, at 6pm to pray the Rosary, followed by a candle lit procession to St Andrew’s Cathedral.

Mr Smeaton said: “Such events around the United Kingdom are an important part of SPUC’s efforts to witness the right to life”.

The Abortion Act “Opened The Door To A Tragedy”
SPUC Scotland Director of Communications and Campaigns, Michael Robinson, said:


"Of all the tragedies to befall a nation none comes close to abortion for the number of lives it ends and injures. It was 52 years ago this weekend that David Steel’s bill was passed. It opened the door to a tragedy that has seen the loss of nine million lives as well as untold emotional and psychological trauma for those involved in abortion.

“After five decades of cooperation with abortion it has become very difficult for our society to be honest about the reality that abortion involves the killing of a baby and its impact on the baby’s mother.. Instead slogans and talk of women’s rights are used to keep the lid firmly on the issue.

“In addition, politicians are struggling to face up to the concerns of an aging society whilst remaining blind to the massive loss of life under the abortion law. Since the passing of the 1967 Abortion Act, over 9 million unborn children in the United Kingdom have been killed. Human life is the greatest resource that a society has yet our political leaders see new life as a threat rather than a gift”.

Abortion 52 Years On
On average, 574 unborn children are killed by abortion every day in the United Kingdom whilst in 2018, abortion rates spiked to a ten year high with over 200,000 unborn children denied life.

The evidence-based review, Abortion and Women’s Health, reveals the horrific impact that abortion can have upon the mental health of some women.

Key findings from the review are that: