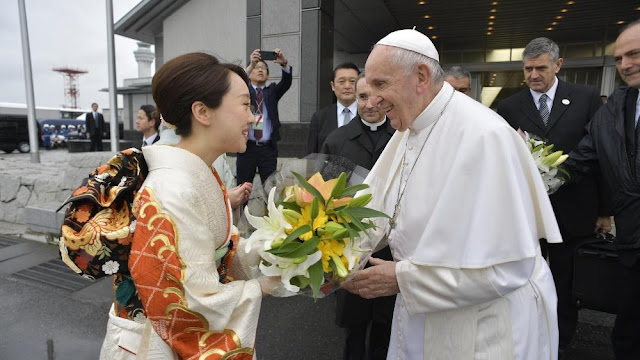 Vatican News reports that Emperor Naruhito – stretched protocol to personally accompany the Pope to his car – to an elderly missionary priest – who had tears in his eyes as he watched his brother Jesuit depart Sophia University – gratitude was written all over the face of every person Pope Francis met.

The dismissal ceremony from Japan took place this morning at Tokyo-Haneda Airport. On leaving the VIP Hall, the Holy Father greeted the Bishops of Japan and the delegations. So - aboard an 8787-9 of All Nippon Airways - he left to return to Italy.

The plane carrying the Holy Father on board on his return from the Apostolic Journey to Thailand and Japan, departed from Tokyo-Haneda Airport at 11.43 local time (3.43 am Rome time), landed at Rome-Fiumicino Airport at 4.25 pm .


Telegram to the Emperor of Japan His Imperial Majesty Naruhito

Immediately after departing by plane from Tokyo, the Holy Father Francis sent the following telegraphic message to the Emperor of Japan, His Imperial Majesty Naruhito:

EMPEROR OF JAPAN
TOKYO
AS I DEPART FROM JAPAN, I RENEW MY DEEP APPRECIATION TO YOUR MAJESTY, THE MEMBERS OF THE IMPERIAL FAMILY AND ALL THE PEOPLE OF JAPAN, FOR YOUR WARM WELCOME AND GENEROUS HOSPITALITY. I ASSURE YOU OF MY PRAYERS AND INVOKE UPON ALL OF YOU ABUNDANT DIVINE BLESSINGS.
FRANCISCUS PP.
Vatican News reports : Before heading to the Vatican after landing in Rome at the end of his 31st Apostolic Journey abroad, Pope Francis prayed at St. Mary Major Basilica. The All Nippon Airways (ANA) aircraft carrying Pope Francis Tokyo, touched down Tuesday evening at Rome’s Leonardo da Vinci Airport. Before returning to the Vatican from the airport, the Pope stopped at the Basilica of St Mary Major to offer a prayer of thanksgiving for the successful conclusion of his November 19-26 Apostolic Journey to Thailand and Japan. Placing a bouquet of flowers before the ancient icon of the Virgin Mary venerated under the Latin title “Salus Populi Romani” (literally, health or salvation, of the Roman People), the Pope paused in a moment of silent prayer. He was then driven to the Vatican.
Posted by Jesus Caritas Est at 6:12 PM