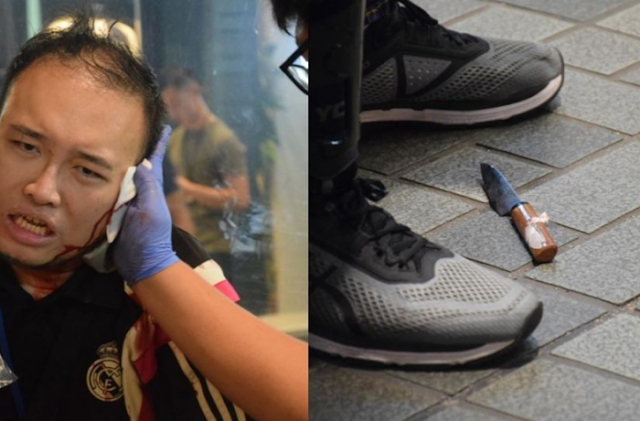 Tai Koo, a pro-China supporter stabs five people and bites the ear of a pro-democracy politician
District Councilor Andrew Chew and the wounded are hospitalized. From August to date at least 10 pro-democracy people have been beaten or wounded by pro-China thugs.


Hong Kong (AsiaNews) - A pro-China supporter has attacked five people with a knife and has bitten the earlobe of a pro-democracy politician. The violent episode took place yesterday at the Cityplaza, a shopping center in the Tai Koo district, on the island of Hong Kong.

Protests, which have lasted four months in the territory, are often held in shopping malls where demonstrators sing the hymn "Glory to Hong Kong" or talk with visitors.

Yesterday an unidentified man, speaking in Mandarin Chinese (the language of popular China) first argued with, then rushed at five people, four men and one woman. District Councilor Andrew Chiu Ka-yin, who was present there, tried to stop him, but the man bit his ear, ripping off a part and leaving him bleeding. A group of people then fought with the attacker and injured him. The wounded and Chiu were hospitalized.

Police yesterday intervened in several shopping centers to kick out the demonstrators.

The demonstrations begun in June to cancel the extradition law in China, have evolved into a request for full democracy for the territory. Faced with the end of dialogue with the government and the violence of the police some fringes of the movement respond with vandalism, blockading roads, throwing bricks and Molotov cocktails at police. Increasingly there are episodes of intolerance. From August to date at least 10 pro-democracy people have been beaten or wounded by pro-China thugs.