Pope Francis confers Ratzinger Prize and Thanks Benedict XVI for Teachings "This is the mission of all who follow the teaching of Joseph Ratzinger .." Full Text 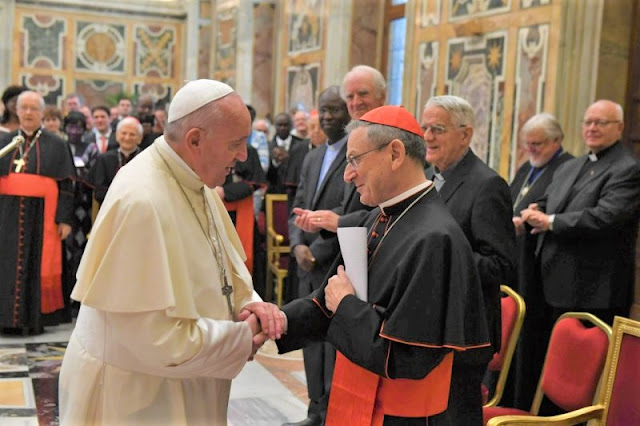 Dear Brothers and Sisters,
I am pleased this year once again to confer the Ratzinger Prizes in person, which for me is a welcome moment.  Firstly, I wish to express my appreciation for the two distinguished prizewinners who have been presented to us by Cardinal Angelo Amato, President of the Scientific Committee of the Joseph Ratzinger–Benedict XVI Foundation: Professor Charles Taylor and Father Paul Béré, whom I respectfully greet, along with their relatives and those accompanying them on this occasion.  I greet also the leaders and friends of the Foundation.
I am happy to have this opportunity to express again my esteem and affection for my predecessor, dear Pope Emeritus Benedict XVI.  We are all grateful for his teaching, and for his exemplary service to the Church, demonstrated by his reflections, his thought and study, his listening, dialogue and prayer.  His aim was that we might consciously retain a lively faith despite the changing times and situations; and that believers could give an account of their faith in a language that can be understood by their contemporaries, entering into dialogue with them, together seeking pathways of authentic encounter with God in our time.
This has always been a keen desire of Joseph Ratzinger the theologian and pastor, who never closed himself off in a disembodied culture of pure concepts, but gave us the example of seeking truth where reason and faith, intelligence and spirituality, are constantly integrated.  All the arts and disciplines thus cooperate in contributing to the full growth of the human person, which is to be found ultimately in the encounter with the living person of Jesus Christ, the incarnate Logos, the revelation of the God who is love.
It is a duty for theology to be and remain in active dialogue with cultures, even as they change over time and evolve differently in various parts of the world.  At the same time, it is a condition necessary for the vitality of Christian faith, for the Church’s mission of evangelization.
It is from this perspective that our two prizewinners have offered important contributions, which we recognize today with gratitude.
During his years of active research and teaching, Professor Taylor has covered many fields, but he has particularly devoted his mind and heart to understanding the phenomenon of secularization in our time.  Secularization effectively poses a significant challenge for the Catholic Church, indeed for all Christians, and for all believers in God.  Pope Benedict repeatedly told us that the priority of his pontificate was to proclaim God anew — the God of Jesus Christ — in a time when that proclamation seems to be on the wane for a large part of humanity.  Few scholars in the present day have posed the problem of secularization with the breadth of vision as has Professor Taylor.  We are indebted to him for the profound manner in which he has treated the problem, carefully analyzing the development of Western culture, the movements of the human mind and heart over time, identifying the characteristics of modernity in their complex relationships, in their shadows and lights.  Thus, he helps us to read in a non-reductive way the reasons for the changes that have taken place in religious practice.  He invites us to intuit and seek new ways to live and express the transcendent dimensions of the human soul, those spiritual dimensions in which the Spirit continues to work imperceptibly.  This allows us to deal with Western secularization in a way that is neither superficial nor given to fatalistic discouragement.  This is needed not only for a reflection on contemporary culture, but also for an in-depth dialogue and discernment in order to adopt the spiritual attitudes suitable for living, witnessing, expressing, and proclaiming the faith in our time.
Father Paul Béré is the first African recipient of the Ratzinger Prize and a renowned scholar of Sacred Scripture.  I am pleased on the occasion of this award to express my appreciation and encouragement to all those committed to inculturation of the faith in Africa through their original and deepened study.  In the first centuries of Christianity, northern Africa gave the Church great figures — Tertullian, Cyprian, Augustine — but the spread of Islam followed by centuries of colonialism prevented a true African inculturation of the Christian message until the second half of the last century.  Contemporary African theology is therefore still young, though dynamic and full of promise.  Father Béré provides an example of this by his work on the interpretation of Old Testament texts in a context of oral culture, thus bringing to fruition the experience of African culture.  He has committed himself to making the Synods that he participated in known, understood, and received in the African context.
In his Apostolic Exhortation Evangelii Nuntiandi, Saint Paul VI said: “Evangelizing means bringing the Good News into all the strata of humanity, and through its influence transforming humanity from within and making it new” (no.18).  This is true for all cultures: access to redemption for humanity in all of its dimensions should be sought with creativity and imagination; this search can be expressed with appropriate language in all areas and spaces in which men and women live their pains, joys and hopes.
Although the two laureates come from different continents and cultural backgrounds, their message is much more similar than appears at first sight.  In the variety of cultures, diverse across time and space, one can and should always seek the way to God and the encounter with Christ.  This has been and remains the work to which Professor Taylor and Father Béré have dedicated themselves.  This is the mission of all who follow the teaching of Joseph Ratzinger as theologian and Pope, to be “co-workers of the truth”.
It is therefore my hope that the recipients of the Ratzinger Prizes, together with all present, continue with enthusiasm and joy their journey on this path. Thank you.
Full Text + Image Source: Vatican.va - Official Translation