Pope Francis explains "In the poor you have found a privileged place of encounter with Christ." Full Text to Jesuits 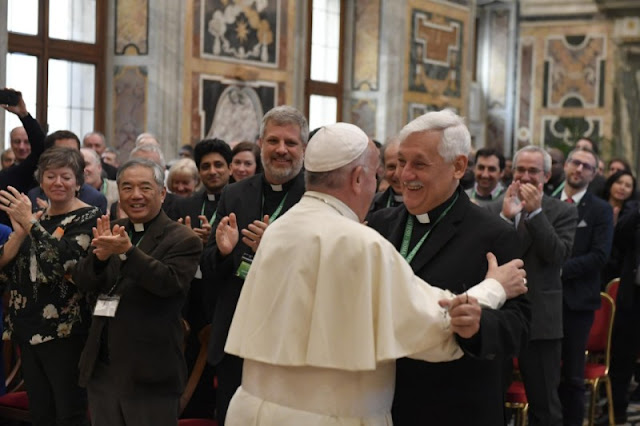 We all know that the Society of Jesus has been called from the beginning to serve the poor, a vocation that Saint Ignatius included in the Formula of 1550. The Jesuits would have dealt with "the defense and propagation of the faith, and the progress of souls in Christian life and doctrine "and dedicated to" reconciling dissidents, to help and piously serve those in prison and in hospitals, and to perform ... all other works of charity "(Formula of the Institute, June 21 1550, approved and confirmed by Pope Julius III). It was not a declaration of intent, but a lifestyle that they had already experienced, which filled them with consolation and to which they felt sent by the Lord.

This original Ignatian tradition has come down to our days. Father Arrupe proposed to strengthen it. At the base of his vocation there was the experience of contact with human pain. Years later he wrote: "I have seen (God) so close to those who suffer, to those who cry, to those who are shipwrecked in this life of abandonment, that the ardent desire to imitate him in this voluntary proximity to the derelicts of the world, which ignited in me society despises "(Este Japón increible. Memory of P. Arrupe, 4th edition Mensajero, Bilbao, 1991, p. 19).

Today we use the word discarded, right? We talk about the culture of waste, this great majority of people left behind. For me, what strikes me deeply about this text is the origin, where it comes from. From prayer, no? Arrupe was a man of prayer, a man who fought with God every day, and from there this fort was born. Father Pedro always believed that the service of faith and the promotion of justice could not be separated: they were radically united. For him all the ministries of the Society had to respond to the challenge of announcing the faith and, at the same time, of promoting justice. What until then had been a task for some Jesuits, was to become a concern for everyone.

The poor, a meeting place with the Lord

Every year the liturgy invites us to contemplate God in the candor of an excluded child, who came among his people, but was not accepted (see Jn 1, 11). According to Saint Ignatius, a maid - a maid, a person, a young woman who serves - assists the Holy Family (see Spiritual Exercises, nos. 111-114). Together with her, Ignazio exhorts us to be there too, "I act like a small and unworthy servant, looking at them, contemplating them and serving them in their needs" (Ibid). This is not poetry or advertising, this Ignazio felt it. And he lived it.

This active contemplation of God, excluding God, helps us to discover the beauty of every marginalized person. No service replaces "appreciating the poor in his own goodness, with his way of being, with his culture, with his way of living the faith" (Apostolic Exhortation Evangelii Gaudium, No. 199).

In the poor you have found a privileged place of encounter with Christ. This is a precious gift in the life of the follower of Christ: to receive the gift of meeting him among the victims and the poor.

The encounter with Christ among his favorites sharpens our faith. This happened in the case of the Society of Jesus, whose experience with the latter deepened and strengthened the faith. "Our faith became more paschal, more compassionate, more tender, more evangelical in its simplicity" (General Congregation 34 of the Society of Jesus, 1995, d. 2, n. 1), especially in the service of the poor.

You have experienced a true personal and corporate transformation in the silent contemplation of the pain of your brothers. A transformation that is a conversion, a return to looking at the face of the crucifix, which invites us every day to remain close to him and lay him down from the cross.

Do not stop offering this familiarity with the vulnerable. Our broken and divided world needs to build bridges so that the human encounter allows each of us to discover in the last the beautiful face of our brother, in which we recognize ourselves, and whose presence, even without words, requires in his need the our care and our solidarity.

Jesus did not have "where to lay his head" (Mt 8:20), dedicated as he was to preaching "the good news of the kingdom" and to cure "all sorts of diseases and infirmities" (Mt 4:23). Today his Spirit, alive among us, urges us to follow him in the service of the crucified of our time.
The situations of injustice and human pain that we all know well abound. "Perhaps we can speak of a third war fought" in pieces ", with crimes, massacres, destruction" (Omelia, Redipuglia, 13 September 2014). Trafficking in persons exists, expressions of xenophobia and the selfish search for national interest abound, inequality between and within countries is growing without finding a remedy. With a progression I would say geometric.

On the other hand, "we have never mistreated our common home as in the last two centuries" (Encyclical Letter Laudato si ’, n. 53). Not surprisingly, once again "the poorest people suffer the most serious effects of all environmental aggressions" (Ibid., N. 48).

Following Jesus in these circumstances involves a set of tasks. Begin with the accompaniment of the victims, to contemplate in them the face of our crucified Lord. Continue to pay attention to the human needs that are born, many times innumerable and unaffordable as a whole. Today it is also necessary to reflect on the reality of the world, to unmask its ills, to discover the best answers, to generate apostolic creativity and the depth that Father Nicolás so desired for the Company.

But our answer cannot stop there. We need a true "cultural revolution" (ibid., N. 114), a transformation of our collective gaze, of our attitudes, of our ways of perceiving ourselves and of situating ourselves before the world. Finally, social ills often become embedded in the structures of a society, with the potential for dissolution and death (see Apostolic Exhortation Evangelii Gaudium, No. 59). Hence the importance of the slow work of transforming structures, through participation in public dialogue, where decisions are made that condition the lives of the last (see Meeting with popular movements in Bolivia, Santa Cruz de la Sierra, 9 July 2015).

Some of you, and many other Jesuits who preceded you, have begun to serve the poorest, to educate, to pay attention to refugees, to defend human rights and social services in multiple fields. Continue with this creative commitment, always in need of renewal in a society with accelerated changes. Help the Church in the discernment that we must do today also on our apostolates. Do not stop collaborating on the web between you and with other ecclesial and civil organizations to have a word in defense of the most needy in this increasingly globalized world. With this globalization that is spherical, which cancels cultural identities, religious identities, personal identities, everything is the same. True globalization must be multi-faceted. Join us, but each keeping its own peculiarity.

In the sorrow of our brothers and of our threatened common home it is necessary to contemplate the mystery of the crucifix in order to be able to give life to the end, as so many Jesuit companions did in 1975. This year we celebrate the 30th anniversary of the martyrdom of the Jesuits of the Central American University of El Salvador, who caused so much pain to Father Kolvenbach and that prompted him to ask the help of Jesuits throughout the Company. Many responded generously. The life and death of martyrs are an encouragement to our service to the least.

And open paths to hope

Our world needs transformations that protect the threatened life and defend the weakest. We look for changes and many times we don't know what they must be, or we don't feel capable of facing them, they transcend us.

In the frontiers of exclusion we run the risk of despair, if we follow only human logic. It is surprising that many times the victims of this world do not let themselves be overcome by the temptation to give in, but they trust and rock hope.

We are all witnesses to the fact that "the most humble, the exploited, the poor and the excluded" can and do a lot ... When the poor organize themselves they become authentic "social poets: job creators, home builders, producers of foodstuffs, especially for those discarded from the world market "(Meeting with popular movements in Bolivia, Santa Cruz de la Sierra, 9 July 2015).

Does the social apostolate exist to solve problems? Yes, but above all to promote processes and encourage hopes. Processes that help people and communities to grow, that lead them to be aware of their rights, to deploy their skills and to create their own future.
Work for "the true Christian hope, which seeks the eschatological Kingdom, [and which] always generates history" (Apostolic Exhortation Evangelii Gaudium, No. 181). Share your hope where you are, to encourage, console, comfort and revive. Please open the future, or, to use the expression of a current man of letters, frequent the future. Open the future, create possibilities, generate alternatives, help to think and act in a different way. Treat your daily relationship with the resurrected and glorious Christ, and be workers of charity and sowers of hope. You walk singing and crying that the struggles and worries for the lives of the least and for the creation threatened do not take away from you the joy of hope (see Laudato si ’, n. 244).

I would like to conclude with an image - we priests in the parishes distribute santini, so that people can bring an image to their home, an image of our family -. The testament of Arrupe, there in Thailand, in the refugee camp, with the discarded, with all that that man had of sympathy, to suffer with those people, with those Jesuits who were opening a breach in that moment in all this apostolate , asks you one thing: do not leave prayer. This was his testament. He left Thailand that day and had a stroke during the flight. May this saint, that this image, always accompany you. Thanks.