Pope Francis quotes Newman "The Church is not afraid of knowledge, but it it purifies everything..." to Universities - Full Text 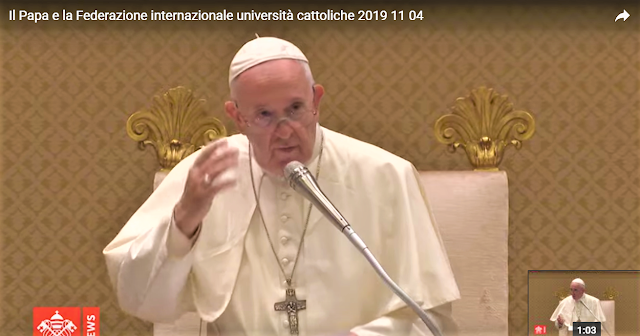 SPEECH OF THE HOLY FATHER FRANCIS
TO THE PARTICIPANTS IN THE INTERNATIONAL CONFERENCE FOR UNIVERSITY MANAGERS:
"NEW FRONTIERS FOR UNIVERSITY LEADERS:
THE FUTURE OF HEALTH AND THE UNIVERSITY ECOSYSTEM "

Welcome to this meeting, on the occasion of the conference of the International Federation of Catholic Universities on the theme "New frontiers for university leaders. The future of health and the university ecosystem ". I cordially greet the President, Prof. Isabel Capeloa Gil, [in Spanish] and I thank her for the courtesy of having spoken in Castilian, and all those present, while I thank the Federation for this commitment to study and research.

Today the university system is faced with unprecedented challenges that come from the development of science, from the evolution of new technologies and from the needs of society that urge academic institutions to provide adequate and up-to-date answers. The strong pressure, felt in the various areas of socio-economic, political and cultural life, therefore challenges the very vocation of the university, in particular the task of the teachers to teach and do research and to prepare the young generations to become not only qualified professionals in various disciplines, but also protagonists of the common good, creative leaders and leaders of social and civil life with a correct vision of man and the world. In this sense, universities today must question themselves about the contribution they can and must make to the integral health of man and to an ecology of solidarity.

If these challenges affect the entire university system, Catholic universities should feel these needs even more sharply. With your universal openness (precisely from "universitas"), you can make the Catholic university the place where solutions for civil and cultural progress for people and for humanity, marked by solidarity, can be pursued with constancy and professionalism, considering what is contingent without losing sight of what has a more general value. The old and new problems must be studied in their specificity and immediacy, but always within a personal and global perspective. Interdisciplinarity, international cooperation and the sharing of resources are important elements for universality to be translated into solidarity and fruitful projects in favor of man, all men and also the context in which they grow and live.

The development of technosciences, as can already be seen, is destined to increasingly influence the physical and psychological health of people. But since it also affects the methods and processes of academic studies, today more than in the past it must be remembered that every teaching also implies questioning itself about the "whys", that is, it requires a reflection on the fundamentals and aims of each discipline. An education reduced to mere technical education or mere information becomes an alienation of education; to believe that we can transmit knowledge by abstracting from their ethical dimension, would be like giving up educating.

It is necessary to overcome the legacy of the Enlightenment. Educating, in general, but particularly in universities, is not just filling the head with concepts. It takes the three languages. It is necessary that the various languages ​​come into play: the language of the mind, the language of the heart and the language of the hands, so that one thinks in harmony with what one feels and does; feel in harmony with what you think and do, do it in harmony with what you feel and think. A general harmony, not separated from the totality. It is therefore necessary to act first of all starting from an idea of ​​education conceived as a teleological process, that is, which looks towards the end, necessarily oriented towards an end and, therefore, towards a precise vision of man. But it is also necessary to have a further perspective to face the issue of why - that is of the ethical sphere - in the educational field. This is its typically epistemological character that concerns all areas of knowledge, and not only humanistic ones but also natural, scientific and technological ones. The connection between knowledge and purpose refers to the theme of intentionality and the role of the subject in every cognitive process. And so we come to a new episteme; It's a challenge: to make a new episteme. Traditional epistemology had emphasized this role by considering the impersonal character of all knowledge as a condition of objectivity, an essential requisite of the universality and communicability of knowledge.
Today, instead, numerous authors highlight how there are no totally impersonal experiences: the mindset, the normative convictions, the categories, the creativity, the existential experiences of the subject represent a "tacit dimension" of knowledge but always present, an indispensable factor for the acceptance of scientific progress. We can't think of a new laboratory episteme, it doesn't go, but of life yes.

In this horizon, the university has a conscience, but also an intellectual and moral strength whose responsibility goes beyond the person to be educated and extends to the needs of all humanity. And the FIUC is called to assume the moral imperative to work towards a more united international academic community, on the one hand sinking its roots more faithfully into that Christian context from which the universities originated and, on the other, consolidating the network between the universities of ancient birth and the younger ones, to develop a universal spirit aimed at increasing the quality of the cultural life of people and peoples. The ecosystem of the universities is built if every university cultivates a particular sensitivity, that given to him by his attention for man, for all mankind, for the context in which he lives and grows and for all that contributes to his promotion.

Leadership training achieves its goals when it manages to invest academic time with the aim of developing not only the mind, but also the "heart", consciousness, and practical skills of the student; scientific and theoretical knowledge must be mixed with the sensitivity of the scholar and researcher so that the fruits of the study are not acquired in a self-referential sense, only to affirm one's professional position, but are projected in a relational and social sense. Ultimately, just as every scientist and every man of culture has an obligation to serve more, because he knows more, so the university community, especially if it is of Christian inspiration, and the ecosystem of academic institutions must respond together to the same obligation.

In this perspective, the path that the Church, and with it Catholic intellectuals, must take, is briefly expressed by the Patron of the FIUC, the neo-canonized Cardinal Newman, in this way: "The Church is not afraid of knowledge, but it it purifies everything, it does not suffocate any element of our nature, but cultivates everything "[1]. Thanks.