Pope Francis sends Video Message to Youth and Explains Death “The question of death is really a question about life.” - Full Text 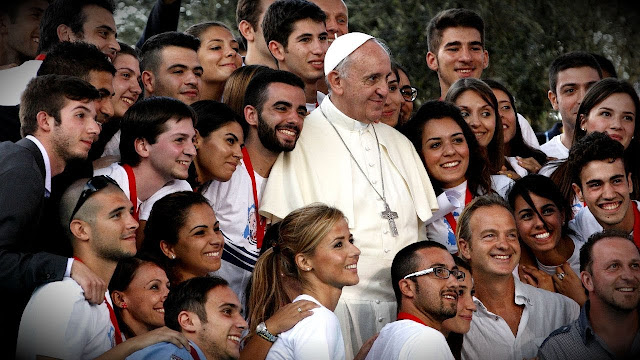 Dear young people of Occurrent Scholas gathered from so many nations of the world, I celebrate with you the end of this meeting. I want to stay there, I want to delay there, in the end.

I know that someone is going to say: "Father, do not put on a funeral face." But let's think about this. I know from a good source that they kept the question about death burning throughout the experience. There they played, thought and created from their differences.

Just as words are born from silence and there they end, allowing us to hear their meanings, the same goes for life. This may sound somewhat paradoxical, but ... it is death that allows life to remain alive!

It is the end that allows a story to be written, that a painting is painted, that two bodies embrace. But beware, the end is not alone at the end. Maybe we should pay attention to every little end of everyday life. Not only at the end of the story, we never know when it ends, but at the end of each word, at the end of each silence, of each page being written. Only a conscious life of this moment ends, it makes this moment eternal.

On the other hand, death reminds us of the impossibility of being, understanding and encompassing everything. It is a slap to our illusion of omnipotence. It teaches us in life to relate to the mystery. The confidence of jumping into the void and realizing that we don't fall, that we don't sink; that always and forever there is someone there who supports us. Before and after the end.

It is the "not knowing" of this question the place of fragility that opens us to the listening and meeting of the other; it is that arising from the shock that calls us to create; and the sense that brings us together to celebrate it.

Finally, the question of death has always formed - throughout the ages and across the land - different communities, peoples and cultures. The different stories that fight in so many corners to stay alive, and others, that have not yet been born. That is why today, perhaps as never before, we should touch this question.

The world is already set up, where everything is explained, there is no place for the open question. That's true? It is true but it is not true. That is our world. It has been configured and there is no place for the open question. In a world that worships autonomy, self-reliance and self-realization, there seems to be no place for the other. The world of projects and the infinite acceleration, of rapidation, does not allow interruptions, and that is why the worldly culture that enslaves tries to anesthetize us to forget what it means to stop at last.

But forgetting death is also its beginning, and also, a culture that forgets death begins to die inside. He who forgets death has already begun to die.

That's why I thank you so much! Because they had the courage to open this question and go through the body the three deaths that empty us fill our lives! The death of every moment. The death of the ego. And the death of a world that gives way to a new one.

Remember, if death does not have the last word, it is because in life we ​​learned to die for another.

Finally, I would like to thank ORT Mundial and each one of the people and institutions that made this activity possible in which the culture of the meeting is palpable.
And I ask each of you please, each in his own way, each according to his convictions: do not forget to pray for me. Thank you.