Pope Francis tells Prison Pastoral Workers "We are certain that the works that Divine Mercy inspires in each of you..." 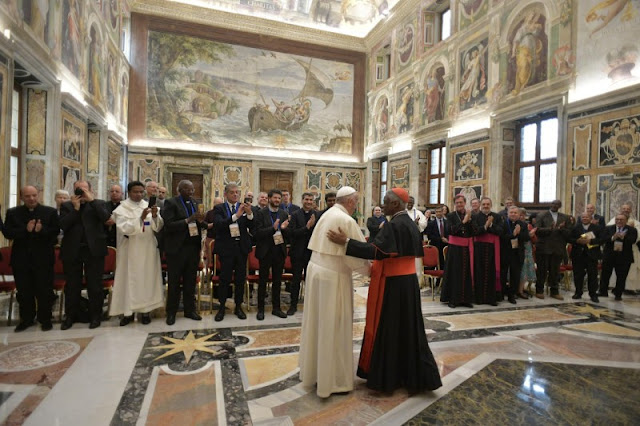 I cordially greet all of you who are participating in this Meeting on Human Integral Development and Catholic Penitentiary Pastoral Care. When I commissioned the Department for Human Development Service Integrate to make the Church's concern for people in particular situations of suffering manifest, I wanted to take into account the reality of so many detained brothers and sisters. However, it is not a task assigned only to the Dicastery, but it is the whole Church in fidelity to the mission received from Christ to be called to work permanently the mercy of God on behalf of the most vulnerable and defenseless in whom Jesus himself is present (see Mt 25 , 40). We will be judged on this.

As I have already pointed out on other occasions, the prison situation continues to be a reflection of our social reality and a consequence of our selfishness and indifference summarized in a culture of waste (see Speech in the visit to the Social Rehabilitation Center of Ciudad Juárez, 17 February 2016). Many times society, through legalistic and inhuman decisions, justified by an alleged search for good and security, seeks in the isolation and detention of those who act against social norms, the ultimate solution to the problems of community life. This justifies the fact that large amounts of public resources are allocated to suppress offenders instead of truly seeking to promote the integral development of people that reduces the circumstances that favor the execution of illicit actions.

It is easier to repress than to educate and I would say that it is even more convenient. To deny the injustice present in society is easier and to create these spaces to enclose transgressors in oblivion that offer equal opportunities for development to all citizens. It is a form of waste, polite waste, in quotation marks.

Furthermore, places of detention often fail to promote reintegration processes, no doubt because they do not have sufficient resources to deal with the social, psychological and family problems experienced by prisoners, and also because of frequent overpopulation of prisons that turns them into real places of depersonalization. On the contrary, a true social reintegration begins guaranteeing opportunities for development, education, decent work, access to health, as well as generating public spaces for civic participation.

Today, in a special way, our societies are called to overcome the stigma of those who have made a mistake because, instead of offering the help and adequate resources to live a dignified life, we have become accustomed to discarding rather than considering efforts that the person performs to reciprocate the love of God in his life. Many times, having left prison, the person must confront a world that is foreign to her, and that furthermore does not recognize her as trustworthy, even going so far as to exclude her from the possibility of working to obtain a decent livelihood. By preventing people from regaining their full dignity, they remain exposed again to the dangers that accompany the lack of development opportunities, in the midst of violence and insecurity.

As Christian communities we must ask ourselves a question. If these brothers and sisters have already served their sentence for the evil committed, why does a new social punishment arise on their shoulders with rejection and indifference? On many occasions, this social aversion is one more reason to expose them to fall into the same mistakes.

Brothers, in this meeting you have already shared some of the many initiatives with which the local Churches pastorally accompany the prisoners, those who have finished the detention and the families of many of them. With the inspiration of God, every ecclesial community takes on its own path to make present the Father's mercy to all these brothers and to make a permanent call resound so that every man and every society tries to act firmly and decisively in favor of the peace and justice.

We are certain that the works that Divine Mercy inspires in each of you and in the many members of the Church dedicated to this service are truly effective. The love of God that sustains and encourages you in serving the weakest, strengthens and increases this ministry of hope that you carry out every day among the prisoners. I pray for every person who, from generous silence, serves these brothers, recognizing the Lord in them. I congratulate all the initiatives with which, not without difficulty, the families of prisoners are also assisted pastorally and accompany each other in this period of great trial, so that the Lord may bless everyone.

I would like to conclude with two images, two images that can help. One cannot speak of a debt settlement with the company in a windowless prison. There is no human pain without a horizon. No one can change life unless he sees a horizon. And many times we are used to blind the eyes of our inmates. Bring this image of the windows and the horizon with you, and make sure that in your countries prisons, prisons, always have windows and horizon, even a life sentence, which for me is questionable, even a life sentence should have a horizon.

The second image is an image that I saw several times when in Buenos Aires I went by bus to some parish in the area of ​​Villa Devoto and passed in front of the prison. The line of people who went to visit the prisoners. Above all the image of the mothers, the mothers of the prisoners, all saw them, because they were in line an hour before entering and then they were subjected to security checks, very often humiliating. Those women weren't ashamed that everyone saw them. My son is there, and we didn't hide their faces for his son. May the Church learn motherhood from those women and learn the gestures of motherhood that we must have towards these brothers and sisters who are being held. The window and the mother in line are the two images I leave you.

With the witness and service you render, keep fidelity to Jesus Christ alive. That at the end of our lives we can hear the voice of Christ calling us saying: "Come, blessed of my Father, inherit the kingdom prepared for you from the foundation of the world ... whenever you have done these things to only one of you have done these little brothers of mine to me "(Mt 25: 34.40). May our Lord of Mercy accompany you, your families and all those who serve the prisoners.