Pope Francis to Group on Interreligious dialogue that there is an "....urgent task of building bridges between peoples and cultures. " 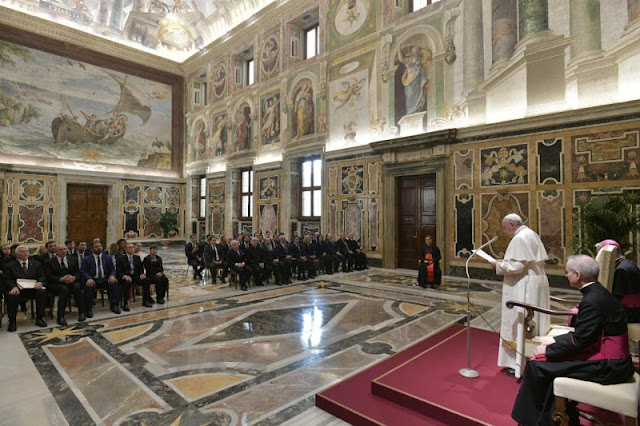 
Ladies and gentlemen:
I am happy to welcome all of you who are taking part in the meeting focusing on the document: “Human Fraternity for World Peace and Living Together”, signed in Abu Dhabi last 4 February.
I thank all the organizers of this meeting, promoted by His Excellency Mr. Rogelio Pfirter, ambassador of the Argentine Republic to the Holy See, under the auspices of the Pontifical Council for Interreligious Dialogue, and in collaboration with the Institute of Interreligious Dialogue of Buenos Aires.
I am pleased to note that this document, which is universal in nature, is also being disseminated in the Americas. I am convinced that the particularity and sensitivity of different countries and continents can truly contribute to a detailed reading of this Document and to a greater and more effective understanding of the message it conveys.
As I said during the World Conference of Human Fraternity: “There is no alternative: we will either build the future together or there will not be a future. Religions, in particular, cannot renounce the urgent task of building bridges between peoples and cultures. The time has come when religions should more actively exert themselves, with courage and audacity, and without pretence, to help the human family deepen the capacity for reconciliation, the vision of hope and the concrete paths of peace” (4 February 2019). Our religious traditions are a necessary source of inspiration to foster a culture of encounter. It is fundamental for there to be interreligious cooperation, based on the promotion of sincere and respectful dialogue that goes towards unity without confusion, maintaining identities. But a unity that transcends the mere political pact. Once, at the beginning of last February, a very wise man, a very wise European politician, told me about this document: “it goes beyond the methodology of the pact to maintain balance and peace, which is very good, but these documents go further”. And he gave me this example: “let us think of the end of the Second World War, let us think of Yalta; in Yalta a balance was struck in order to break the impasse, a balance that was weak but possible. The cake was shared, and a period of peace was maintained, but these documents, this attitude that goes towards dialogue among the transcendent, creates fraternity, surpasses pacts, surpasses the political; it is political in that it is human, but it surpasses this, it transcends this, it makes it nobler”. This is the way. And meanwhile, yes, at the political level, doing what can be done, because it is also important.
The world observes us, believers, to see what our attitude is to the common home and to human rights; it also asks us to collaborate among ourselves and with men and women of good will who do not profess any religion, so that we may give effective responses to the many scourges in our world, such as war, hunger, the poverty that afflicts millions of people, the environmental crisis, violence, corruption and moral degeneration, the crisis of the family and of the economy and, above all, the lack of hope.
The intention of the Document is to adopt: the culture of dialogue as a way; common collaboration as conduct; mutual knowledge as a method and criterion. From now on it can be affirmed that religions are not a closed system that cannot be changed, but with their own identity. And this is the key: identity cannot be negotiated, because if you negotiate identity there is no dialogue, there is submission. With their own identity, they are in motion.
Fraternity is a complex human reality, to which one must pay attention and treat with delicacy. When God asks us: “Where is your brother?”, the first question on fraternity that is in the Bible, “Where is your brother?” no one may answer: “I do not know” (cf. Gen 4: 9). Then different questions arise: How can we take care of each other in the one human family in which we are all brothers? How can we nurture a fraternity so that it is not theoretical and so that it translates into fraternity? How can we make the inclusion of the other prevail over exclusion in the name of belonging? What can we do so that religions are channels of fraternity instead of barriers of division? A little history should alarm us: religious wars, Christians, let us think of the last thirty years, even if we just think of Saint Bartholomew’s Eve. If one does not feel a little alarmed inside, one should wonder why.
It is important to demonstrate that we believers are a factor of peace for human societies, and that we will thus respond to those who unjustly accuse religions of fomenting hatred and being the cause of violence. In today’s precarious world, dialogue among religions is not a sign of weakness. It finds its own raison d'être in God’s dialogue with humanity. It is about changing historical attitudes. A scene from The Song of Roland comes to me as a symbol, when the Christians defeat the Muslims and put them all in line in front of the baptismal font, and one with a sword. And Muslims had to choose between baptism or the sword. That is what we Christians did. It was a mentality that today we cannot accept, nor understand, nor can it work anymore. Beware of the fundamentalist groups: everyone has his own. In Argentina too there is a little fundamentalist corner. And let us try, with fraternity, to go forward. Fundamentalism is a scourge and all religions have some kind of fundamentalist first cousin there, which forms a group.
I hope that this Message of Fraternity will be received by the international community, for the good of the whole human family, which must move from simple tolerance to true coexistence and peaceful coexistence. Keep up the good work.
And please do not forget to pray for me, as I need it. Thank you.