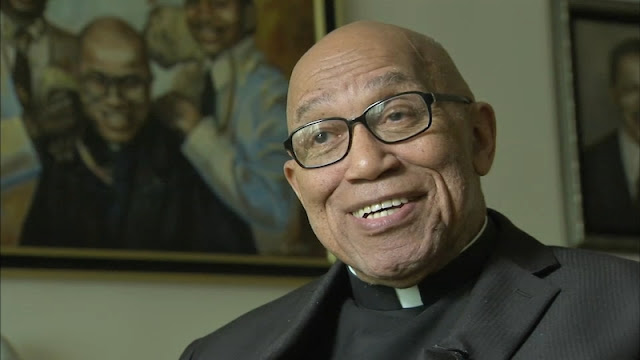 Fr. George Clements, a Catholic priest from Chicago, USA, has died on Monday, November 25, 2019 at a hospital in Northwest Indiana. He was 87 years old.

Clements’ death was confirmed by his son Joey Clements, the first of the famous pastor’s four adopted children.

Clements suffered a stroke in November, according to a family spokesperson. And within the last month, Clements also suffered a heart attack, said fellow South Side priest Rev. Michael Pfleger of St. Sabina Church.

Active in the civil rights movement, Clements marched with the Rev. Martin Luther King Jr., in Chicago, Alabama and Mississippi and was arrested.

In 1980, Clements became the first Catholic priest to adopt a child. He would adopt three more. His career inspired a made-for-TV movie in 1987, “The Father Clements Story,” starring Louis Gossett Jr.

Clements “was one of the first voices advocating for civil rights for African-Americans within the Catholic Church,” Pfleger said.

In August, Clements was accused of sexually abusing a minor in 1974 as pastor of Holy Angels Parish in Bronzeville.

Cardinal Blase Cupich of the Archdiocese of Chicago asked Clements “to step aside from ministry” pending the outcome of an investigation into the allegation.

Clements told the Chicago Sun-Times the allegation was “totally unfounded.”

A spokesperson for the Illinois Department of Children and Family Services told the Sun-Times earlier this month that the allegation had been classified “unfounded” after an investigation found “there was nothing” to support it.

In 1945, Clements became the archdiocese’s first African-American graduate of Archbishop Quigley Preparatory Seminary. He was ordained as a priest in 1957 and went on to become the first black pastor at Holy Angels in 1969.

Clements spearheaded the “One Church-One Child” program in 1980, which aimed to spur Catholic churches to find adoptive parents for orphaned black children. Clements started a similar program for people living with drug addiction in 1994 and another for incarcerated people and their families in 1999.

“The priesthood is a vocation. But then along the way, one gets avocations, and mine were three: homelessness, addicts and prisoners,” Clements told the Sun-Times in 2017.

Clements is one of six children born to Samuel and Aldonia Clements. His father worked at the stockyards and his mother was a homemaker.

After adopting Joey from Uhlich Children’s Home in 1981, he adopted his second son, Friday, a year later from an orphanage in Nigeria.

Two more sons followed: Stewart, adopted after they met on an Oprah Winfrey show about adoptions; and Saint Anthony, in 1985, after the principal of Phillips High School called Rev. Clements seeking help for a troubled, neglected teen.

“I’m really, really proud of what they’ve accomplished,” Clements said of his sons in 2017. “They haven’t become world leaders, but they haven’t been to jail, or on drugs, or anything like that. God is good.”