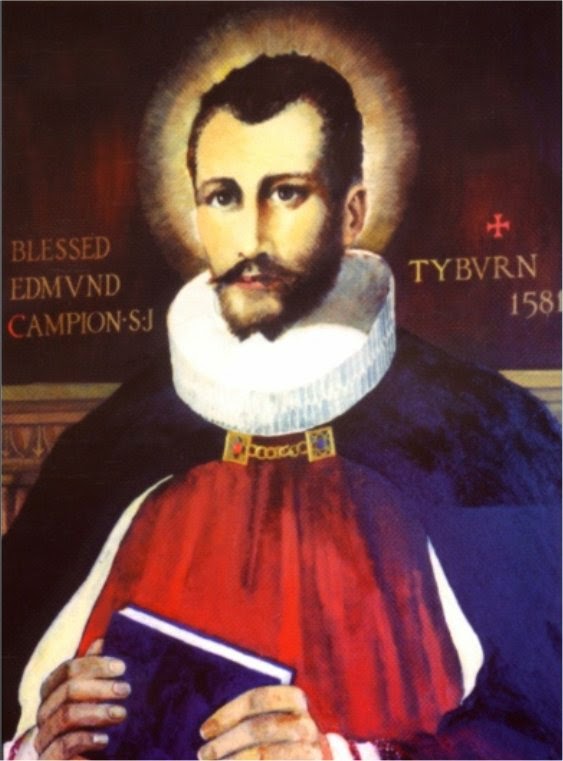 Born:
January 24, 1540, London
Died:
December 1, 1581, Tyburn, England
Canonized:
October 25, 1970 by Pope Paul VI
English Jesuit and martyr; he was the son and namesake of a Catholic bookseller, and was born in London, 25 Jan., 1540; executed at Tyburn, 1 Dec., 1581. A city company sent the promising child to a grammar school and to Christ Church Hospital. When Mary Tudor entered London in state as queen, he was the schoolboy chosen to give the Latin salutatory to her majesty. Sir Thomas White, lord mayor, who built and endowed St. John's College at Oxford, accepted Campion as one of his first scholars, appointed him junior fellow at seventeen, and, dying, gave him his last messages for his academic family. Campion shone at Oxford in 1560, when he delivered one oration at the reburial of Amy Robsart, and another at the funeral of the founder of his own college; and for twelve years he was to be followed and imitated as no man ever was in an English university except himself and Newman. He took both his degrees, and became a celebrated tutor, and, by 1568, junior proctor. Queen Elizabeth had visited Oxford two years before; she and Dudley, then chancellor, won by Campion's bearing, beauty, and wit, bade him ask for what he would. Successes, local responsibilities, and allurements, his natural ease of disposition, the representations, above all, of his friend Bishop Cheyney of Gloucester, blinded Campion in regard to his course as a Catholic: he took the Oath of Supremacy, and deacon's orders according to the new rite. Afterthoughts developing into scruples, scruples into anguish, he broke off his happy Oxford life when his proctorship ended, and betook himself to Ireland, to await the reopening of Dublin University, an ancient papal foundation temporarily extinct. Sir Henry Sidney, the lord deputy, was interested in Campion's future as well as in the revival which, however, fell through. With Philip Sidney, then a boy, Campion was to have a touching interview in 1577.