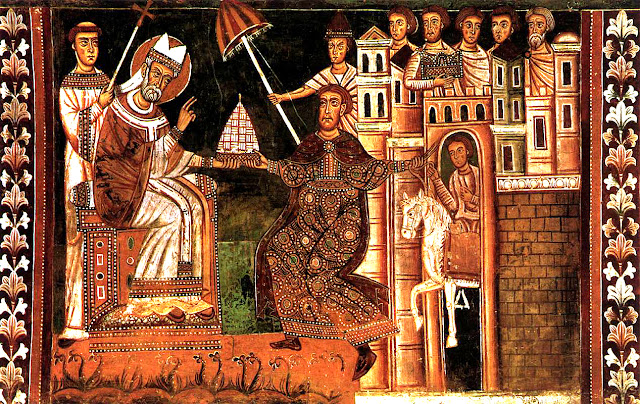 Founder of the Sylvestrines, b. of the noble family of the Gozzolini at Osimo, 1177; d. 26 Nov., 1267. He was sent to study jurisprudence at Bologna and Padua, but, feeling within himself a call to the ecclesiastical state, abandoned the study of law for that of theology and Holy Scripture, giving long hours daily to prayer. On his return home we are told that his father, angered at his change of purpose, refused to speak to him for ten years. Sylvester now accepted a canonry at Osimo and devoted himself to pastoral work with such zeal as to arouse the hostility of his bishop, whom he had respectfully rebuked for the scandals caused by the prelate's irregular life. The saint was threatened with the loss of his canonry, but decided to leave the world on seeing the decaying corpse of one who had formerly been noted for great beauty. In 1227 he retired to a desert place about thirty miles from Osimo and lived there in the utmost poverty until he was recognized by the owner of the land, a certain nobleman named Conrad, who offered him a better site for his hermitage. From this spot he was driven by damp and next established himself at Grotta Fucile, where he eventually built a monastery of his order. In this place his penances were most severe, for he lived on raw herbs and water and slept on the bare ground. Disciples flocked to him seeking his direction, and it became necessary to choose a rule. According to the legend the various founders appeared to him in a vision, each begging him to adopt his rule. St. Sylvester chose for his followers that of St. Benedict and built his first monastery on Monte Fano, where, like another St. Benedict, he had first to destroy the remains of a pagan temple. In 1247 he obtained from Innocent IV, at Lyons, a bull confirming his order, and before his death founded a number of monasteries. An account of his miracles and of the growth of his cultus will be found in Bolzonetti. His body was disinterred and placed in a shrine (1275-85) and is still honoured in the church of Monte Fano. Clement IV first recognized the title of blessed popularly bestowed on Sylvester, who was inscribed as a saint in the Roman Martyrology by order of Clement VIII (1598). His office and Mass were extended to the Universal Church by Leo XIII. His feast is kept on 26 November.
Source: The Catholic Encyclopedia
Posted by Jesus Caritas Est at 9:49 PM