1st Speech by New President of Argentina : Alberto Fernández who refers to the Pope as "dear Pope Francis" 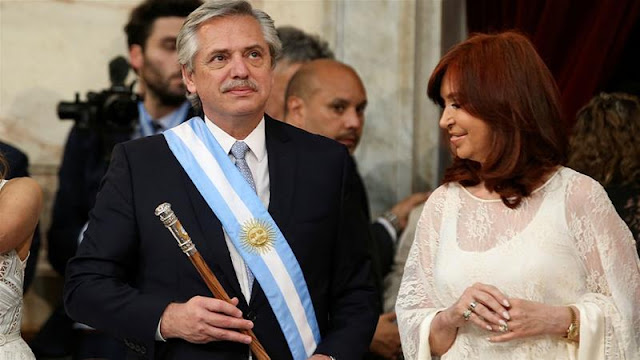 AMERICA/ARGENTINA - First speech by new President Fernández: "We must get out of this situation with solidarity"Buenos Aires (Agenzia Fides) - The new President of Argentina, Alberto Fernández, recalled several expressions of Pope Francis in his first speech before the Legislative Assembly. The leader of the Frente de Todos, who won the elections, accompanied by Cristina Fernández as vice president, used the formula "for God, Fatherland and the holy Gospels" when he swore as president.
In his first message as President, according to Aica news agency, Fernández referred to the Pope as "dear Pope Francis" and used some of his usual expressions: "waste culture", "marginalized and excluded", "the last", "inclusion and equity", "common house", among others. In the same way, he anticipated that the ministry of the environmental area will be inspired by Pope Francis’ encyclical Laudato Sì, which he defined "ethical and ecological magna charter at a universal level".
"The marginalized and excluded from our homeland, those affected by the culture of waste, not only need a piece of bread. They must be part and be guests of the same table, of the great table of a nation that must be our common home", the new President underlined.
Referring to the situation in the country, Alberto Fernández highlighted that "in a context of extreme gravity, of emergency, we must understand that there is no possibility of asking for sacrifices to those who are hungry, you cannot ask for sacrifices to those who cannot reach the end of the month. We must get out of this situation with solidarity". He then continued: "If we can stop hatred, we can stop the decline of Argentina. First and foremost liberation as a country is to guarantee that hatred has no power over our spirits. (CE) (Full Text: Agenzia Fides, 12/12/2019
)
Posted by Jesus Caritas Est at 7:06 AM