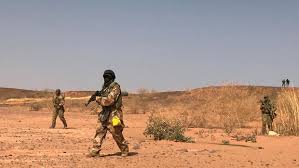 AFRICA/NIGER - "Let us pray and fast for peace in Niger" urges the Archbishop of Niamey after the massacre of 70 soldiers
Niamey (Agenzia Fides) - "After the massacre of over 70 Nigerian soldiers in Inatés on 10 December, near the border with Mali, the government ordered three days of national mourning. On Friday 13 December, the day of prayer for Muslims, there was a special memory in the Country's mosques. The other religious confessions were also invited to join the prayer", writes from Niamey to Agenzia Fides Fr. Mauro Armanino, of the Society of African Missions (SMA). And it is in this light that we should read the text of the prayer proposed by the Archbishop of Niamey, Mgr. Laurent Lompo, son of this land".
"The attack on 10 December in Inatés, which caused the death of more than 70 Nigerian militants, shows us the situation in which we live", said Mgr. Lompo in his message, sent to Fides. "I invite the Christian community to pray at this moment, to ask God for peace with prayer and fasting for Niger, because without Him every effort is in vain".
Fr. Armanino adds, referring to his confrere Fr. Pierluigi Maccalli, kidnapped on 17 September 2018 (see Fides, 18/9/2018): "Let us remember that in a few days it will be a special Christmas for some communities of the diocese of Niamey that, without their pastors, one of whom taken hostage, will celebrate the feast with particular gravity. Furthermore, in neighboring Burkina Faso various Christian communities have been severely affected by terrorism".
"The invitation of the Bishop therefore resonates particularly eloquently in a context in which the fear in the Christian communities of the Christmas holidays is perceptible. Our churches and temples will be "protected" by the military, also proven by what happened recently. The head of the Makalondi parish said that their Christmas vigil, instead of being at midnight, will be at noon, for security reasons", the missionary concludes. (L.M.) (Agenzia Fides, 16/12/2019
)
Posted by Jesus Caritas Est at 8:54 AM