At Mass, Pope Francis says We should “make straight the path of the Lord who is coming” during Advent 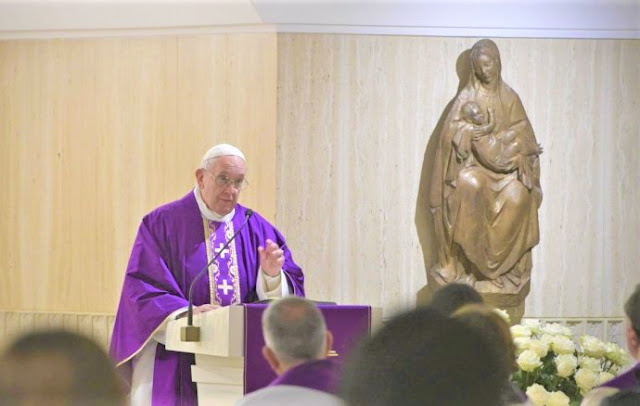 Pope Francis took his cue from the day’s Gospel (Mt 21:23-27), in which the chief priests confront Jesus about the origin of His teaching authority.

Jesus turns the question around and asks his interrogators whether John the Baptist’s authority came from God. They claim not to know, and refuse to take a position on the matter.

Pope Francis said the chief priests’ questioning reveals two attitudes of lukewarm Christians: wanting to put God in a corner and to wash our hands of challenges.

The Pope called these attitudes “dangerous” because they are “like challenging God”. If God did the same with us, he said, “we would never enter Paradise”.

Two wishy-washy attitudes
Pope Francis noted that Jesus taught, exhorted, and healed people. This caused consternation among the chief priests and the elders, he said, because Jesus’ kindness and care “led all people to Him”.

So the religious leaders challenged His authority.

Jesus, said the Pope, wisely returned the favor by asking about the authority of John the Baptist, whom they did not believe but did not oppose out of fear of his supporters.

Mediocrity
The Holy Father called their middle-of-the-road position “a mediocre attitude” and “one taken by liars of the faith”.

“It was not only Pilate who washed his hands of Jesus; these men do so too: ‘We do not know.’ Not entering into relationship with others, not getting involved in their problems, not fighting for their rights, not fighting to heal the many people who are in need, saying ‘It’s best not to. Let’s not dirty our hands with this.’”

‘Rosewater Christians’
Pope Francis said Jesus refuses to answer his interrogators with their same song: “Neither shall I tell you by what authority I do these things.”

“These are two attitudes of lukewarm Christians, of us – as my grandmother said – ‘rosewater Christians’: Christians without substance. One puts God in a corner: ‘Either you do this for me or I won’t go to Church anymore’. And how does Jesus respond? ‘Okay, go. Deal with it yourself.’”

Backing down
The other attitude, added Pope Francis, is to wash our hands of everything, “like the disciples traveling toward Emmaus on the morning of the Resurrection”.

“Many Christians wash their hands when faced with the challenges posed by society, history, or people of their time, even regarding the smallest difficulties. How often do we hear about cheap Christians who refuse to give alms to one who asks for it: ‘No, I won’t give anything because he will just get drunk.’ They wash their hands… Putting God in a corner and washing one’s hands are two dangerous attitudes, because they are like challenging God. We can imagine what would happen if the Lord put us in a corner. We would never enter Paradise. And what would happen if the Lord washed His hands of us? Poor things.”

Make straight His path
In conclusion, Pope Francis invited us to ask whether either of these attitudes resides in our hearts.

If so, he urged, we should banish them “to make straight the path of the Lord who is coming.”
Posted by Jesus Caritas Est at 10:16 AM