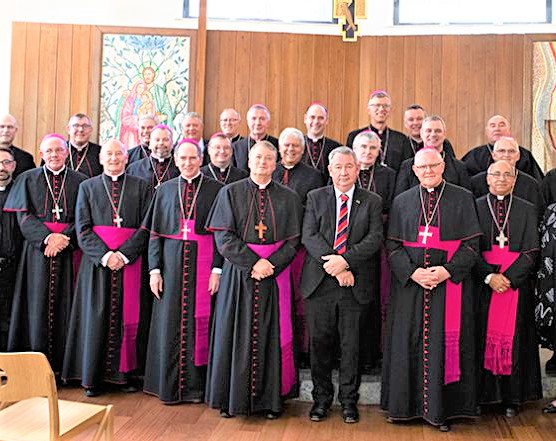 The publication of the report from the Australian Catholic Bishops Conference (ACBC) and Catholic Religious Australia (CRA) coincides with the second anniversary of the release of the Royal Commission’s final report. The Church’s report, which focuses on progress from November 2018 to November 2019, is itself responding to one of the Royal Commission’s recommendations.
“The past year has seen steady and significant progress made across a range of areas, including in education, in governance reform and in responding to victims and survivors of child sexual abuse,” ACBC president Archbishop Mark Coleridge said.
“Clearly, any institution that engages with young people must always be vigilant, working to ensure that strong and effective protocols and procedures are in place, generating a culture committed to prompt and decisive action when allegations arise.”
CRA president Br Peter Carroll FMS said the adoption of the National Catholic Safeguarding Standards earlier this year was an important moment in the Church’s response.
“The Standards that religious institutes and dioceses have endorsed build on the 10 key elements as outlined by the Royal Commission, adding an additional layer of requirements that reflect the circumstances of the Catholic Church,” he said. Br Peter said crucial work is under way to develop new national guidelines to strengthen and standardise responses to historical and more recent concerns and allegations of abuse. Work on those guidelines, being developed with input from survivors of abuse, will continue in 2020.
“Catholic Religious Australia and the Bishops Conference are working together to create or enhance approaches that are informed by best practice and reflect Catholic understandings. How we protect those in our care and how we respond to people who have been harmed by the Church is core to our ministry,” Br Peter said.
Across the Catholic Church, all Catholic dioceses but one and the major religious institutes have joined the National Redress Scheme. “The Redress Scheme is one avenue for victims and survivors to pursue,” Archbishop Coleridge said. “They can contact institutions directly or access a pastoral response such as Towards Healing. Some will choose civil action. The Church’s clear statement is that sexual abuse allegations are to be taken straight to the police as such behaviour is a crime.” Br Peter and Archbishop Coleridge reaffirmed the Church’s unreserved commitment to keeping children and vulnerable people safe in Catholic settings at all times.
Source: https://www.catholic.org.au/acbc-media/media-centre/media-releases-new/2230-significant-progress-made-but-keeping-kids-safe-remains-top-priority/file
Posted by Jesus Caritas Est at 9:02 AM