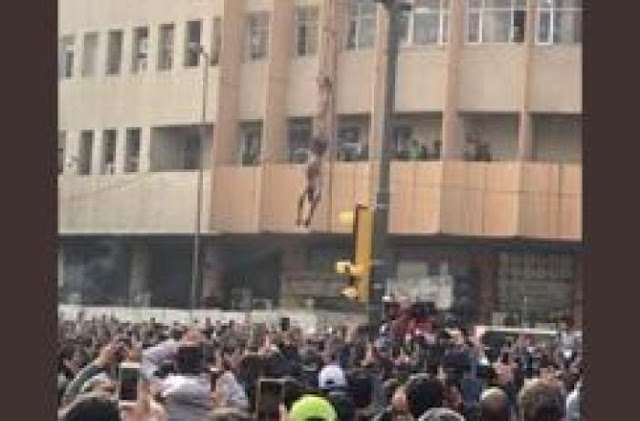 Horror in Baghdad as protesters beat to death 17-year-old, hang him from a light pole
by Pierre Balanian
The young man complained about protesters burning tires in the street near his home. The crowd stirred up violence against the young man and took selfies. The body was desecrated. Shia religious authorities and the government condemn the incident. Videos posted on Twitter.

Baghdad (AsiaNews) – Seventeen-year-old Haitham Ali Ismael  was born in a poor neighbourhood near Al Wathba Square. He had hopes for a better life and a decent job to allow him to look after his mother. Instead, Haitham's life ended in a brutal and horrific way.

Yesterday, an enraged mob of protesters broke into Haitham's home, beat his mother in front of him, forcibly dragged him out, beat him up, and set fire to the house. They slit his throat, tied his body to a van and dragged him before hanging him by the feet from a traffic light pole (picture 1). Compounding the horror, people in the street reacted by encouraging the executioners, taking selfies to capture the moment.

This kind of violence closely resembles the criminal practices of the Islamic State group, from which Iraq freed itself two years ago. Some justified the gruesome deed claiming that Haitham was a "Jocker", a sobriquet used in Iraq for members of a "fifth column in the pay of the Americans", people thought to sow disorder in protests, indiscriminately shooting at and killing protesters and police, and sparking new violence.

Sources who spoke to AsiaNews tell a different story. According to Hussein Suker, an eyewitness, protesters had been in front of Haitham’s house for days, creating unease among the women inside, who stopped going out, especially after they were harassed by some protesters.

According to Hussein, most protesters were not locals, but people from other provinces. Yesterday, Haitham asked them not to burn tires in front of their house because it was making it hard for people to breathe, to burn them further away instead.

Baghdad’s Al Wathba Square, where Haitham lived, leads to Ahrar Bridge, near Al Khilani Square and the Sanak Bridge, on the way to the Green Zone.

"He is a Jocker, he is one of the Resistance," some rebels shouted. Haitham’s mother tried to calm the crowd, but was beaten up. Haitham, trying to protect his mother, took a Kalashnikov and fired some shots without killing anyone.

At that point the rioters accused him of being an infiltrator, a jocker, and the horrible crime took place with people proudly taping it with their mobile phones. After the body was taken down from the makeshift gallows, it was mutilated.

For over a month Iraq has been the scene of a broad protest movement against the government and the authorities. Protests have been forcibly suppressed by police, but in the end Prime Minister Adel Abdul Mahdi was forced to resign. However, protesters, irrespective of ethnic or religious background, want the fall of the whole political class.

In general, protests are peaceful, but in late November, crowds twice attacked the Iranian consulate in Najaf, with the escalating violence causing the death of 450 people and injuring some 20,000.

Some videos of Haitham’s summary execution – with very violent images – were posted on Twitter: Video one and Video two.
Full Text Source: AsiaNews IT
Posted by Jesus Caritas Est at 10:23 AM