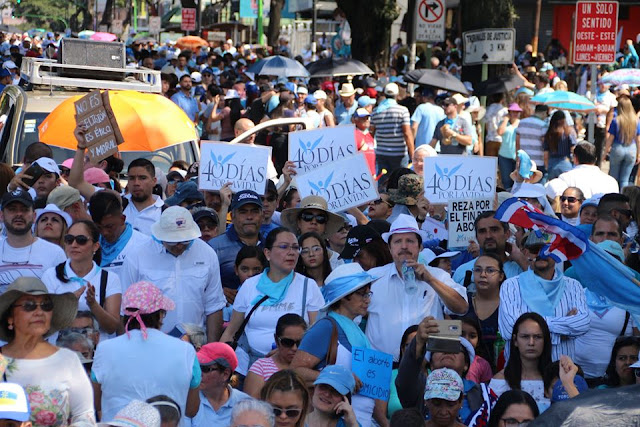 Evangelical Focus reports the pro-life march in San Jose, the capital, in early December 2019, united Costa Ricans of all ages and religious affiliations against a plan to expand abortions.

Pro-life leaders with the National Front for Life and other groups said politicians are not being clear about the impact of the proposed abortion regulation.

“Costa Rica is a nation of life, a country that believes in life. Suddenly, in a deceptive way, they want to substitute a law that represents the heart of Costa Ricans with an unnecessary law, by which they can make abortion legal,” said Ricardo Salazar, pastor of Abundant Life Church.

“The groups that have promoted this statute are the same ones that ask for abortion without any reason,” said Fabricio Alvarado, leader of the country’s opposition party, who participated in the march. “This shows us that what this statute really proposes is unlimited abortion in Costa Rica.”

During the march, Costa Ricans urged President Carlos Alvarado to refuse to sign the life-destroying regulation, according to the local news.

Fabricio Alvarado told the president to represent the will of the people, who want unborn babies to be protected.

“Mr. President, by intending to sign this statute, you are going against the people. You are taking action against a population who is pro-life, against people who do not agree with it, and know that this statute is not necessary, people who are very familiar with this issue,” Fabricio Alvarado said.

Health Ministry leaders claim the new regulation is just a clarification of the country’s current abortion laws, which prohibit abortions unless the mother’s health or life is in danger. Alejandra Acuña, deputy minister of the Health Ministry, said it is only a “guide for medical professionals” about doing abortions legally, according to The Times.

However, abortion activists have a reputation for using vague language in laws and regulations that allows for more wide-spread abortions than what they claim. The term “health of the mother,” for example, can be interpreted so widely as to allow any abortion for any reason at any time of pregnancy. In many abortion activists’ minds, an abortion is health care.

Costa Rica protects unborn babies and mothers from abortion. But many countries across the world are under intense international pressure to legalize the killing of the unborn. The pro-life march in Costa Rica demonstrates that its citizens want every baby’s life to be protected, born and unborn.
Edited from LifeNews and http://evangelicalfocus.com/

Posted by Jesus Caritas Est at 9:24 AM