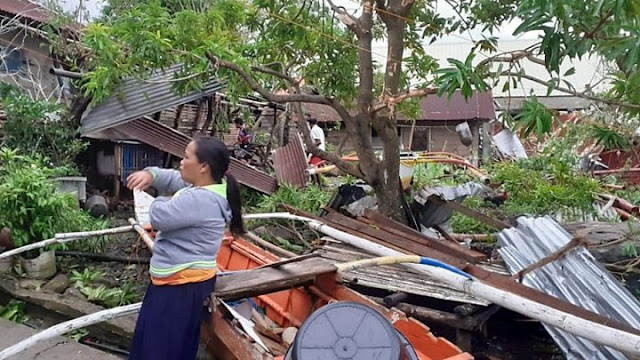 A strong typhoon that barrelled through the central Philippines left at least 20 people dead and forced thousands to flee their homes, devastating Christmas celebrations in the mainly Catholic country.

The Typhoon named Phanfone has caused many people to be stranded in sea and airports at the peak of holiday travel, set off landslides, engulfed low-lying villages with floods, destroyed houses, downed trees and electrical posts and knocked out power in entire provinces. One disaster response officer described the battered coastal town of Batad in Iloilo province as a "ghost town" on Christmas Day.

"You can't see anybody because there was a total blackout, you can't hear anything. The town looked like a ghost town," Cindy Ferrer of the regional Office of the Civil Defence said by phone.

The storm weakened slightly on Thursday as it blew into the South China Sea with sustained winds of 120 kilometres per hour and gusts of 150 km/h after lashing island after island with fierce winds and pounding rain on Christmas Day, the weather agency said.

Most of the 20 deaths reported by officials were due to drowning, falling trees and accidental electrocution.

The typhoon hit the Eastern Samar province on Christmas Eve and then traveled across the archipelago's central region on Christmas, slamming into seven coastal towns and island provinces without losing power, government forecasters said.

Provincial officials, army troops, police and volunteers spent Christmas away from home to tend to thousands of displaced residents in town gymnasiums and schools turned into emergency shelters.

More than 25,000 people were stranded in sea ports across the central region and outlying provinces after the coast guard prohibited ferries and cargo ships from venturing into dangerously choppy waters. Dozens of domestic flights to and from the region were cancelled.

About 20 typhoons and storms batter the Philippines each year.
Above Edited from CBC News
VaticanNews reports that after reciting the St Stephen’s Day Angelus, Pope Francis appealed for the people of the Philippines, victims of Christmas Day Typhoon Phanfone which killed at least 13 people. “I join in the suffering that has struck the dear people of the Philippines due to Typhoon Phanfone”, said the Pope.
Before inviting the faithful gathered in St peter’s Square to recite the Hail Mary Prayer, he assured them of his own prayers, “for the numerous victims, for the wounded and for their families”.
Posted by Jesus Caritas Est at 10:36 AM