#BreakingNews Terrorist Attack in front of Cathedral on Christmas Eve in the Philippines with 22 People Injured - Please Pray! 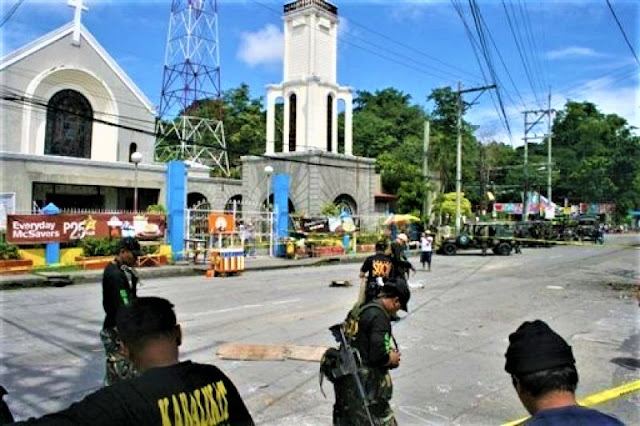 ASIA/PHILIPPINES - Terrorist violence on Christmas eve: attack in front of the Cathedral
Cotabato (Agenzia Fides) - Terrorist violence has bloodied the Southern Philippines on Christmas eve: yesterday, on the evening of December 22, during Sunday Mass, a bomb exploded outside Cotabato Cathedral, a city on the island of Mindanao in the south of the Philippines. 22 people were injured in the explosion. Among them there were 12 soldiers who were employed in the patrol of the church, one of the security measures adopted during the Christmas holidays. A second bomb attack occurred a short distance away, injuring a passer-by. "It is a cowardly act on the eve of the Christmas celebrations. The Church strongly condemns these attacks on people and churches", reports Father Zaldy Robles, a Catholic priest serving in the Cathedral of the Immaculate Conception in Cotabato, to Agenzia Fides. Father Robles tells Fides that the explosion occurred when Sunday mass was underway; people, in a panic, took refuge in the church. Despite the climate of tension and fear, church leaders urged the local population "not to be afraid to celebrate Christmas with joy and courage". In another province, Maguindanao, a bomb was detonated in the city of Upi, injuring two people. A bomb was then dropped at a local police station but did not explode. The army and police have stepped up their investigations to look for the perpetrators of these serial explosions. "Security measures have been strengthened", said the mayor of Cotabato, Cynthia Guiani-Sayadi.

According to Major Arvin Encinas, spokesman for the Western Army Command in Mindanao, terrorist groups such as the "Bangsamoro Islamic Freedom Fighters" (BIFF) or linked to the self-styled "Islamic State" (Isis) may be behind the attacks.

The violent acts follow the attack carried out ten days ago, when two people were killed and 35 others wounded in Cotabato in the bomb attack on a shopping mall attributed to militants linked to Isis. In January 2019, 27 people were killed and 777 wounded when two bombs exploded during Sunday mass at the cathedral on Jolo Island, an area considered a stronghold of Islamist militants. The attack came just days after the referendum establishing a new autonomous region for the Muslim population, in an attempt to end a conflict that has left more than 150,000 people dead in 50 years. The Catholic faithful of Cotabato recall that in May 2009 a bomb exploded outside the Church of the Immaculate Conception, killing five people and injuring 45. At the time Archbishop Orlando Quevedo, who was celebrating Mass, called the act a "sacrilegious attack". (SD-PA) (Full Text Source: Agenzia Fides, 23/12/2019)
Posted by Jesus Caritas Est at 11:21 AM