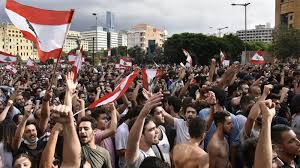 ASIA/LEBANON -
Patriarch Rai on the Lebanese crisis: "politicians have not listened to the voice of God"
Beirut (Agenzia Fides) - "If politicians were truly inspired by the divine will and prayed, Lebanon would not find itself today in a desperate economic and financial situation, with paralyzed institutions. The people would not be reduced to hunger, humiliated, with more than a third of its citizens below the poverty line, while about half of the Lebanese are unemployed". This was underlined by the Maronite Patriarch Bechara Boutros Rai, during Mass on Sunday 15 December. During the homily the Primate of the Maronite Church wanted to express some criteria of spiritual discernment with respect to the situation of crisis experienced by the Country of Cedars, also exhausted from an economic point of view after two months of popular protests against the political class, accused of corruption and incompetence. "If the leaders had listened to the voice of God", the Patriarch continued, "they would not have squandered public funds, the ministries would not have been divided among themselves and they would not have ignored the requests of the people who demonstrate and strike". With regard to protest demonstrations, Cardinal Rai reiterated that in his opinion the popular uprising sees the various components of the Lebanese people express their dissatisfaction in a transversal manner, beyond sectarian divisions. A phenomenon that politicians "cannot ignore or underestimate".
The street protests led to the resignation from the government led by Sunni Prime Minister Saad Hariri, on 29 October. Hariri himself could receive an exploratory mandate tomorrow from President Michel Aoun to try to form a new government. (GV) (Agenzia Fides, 16/12/2019)
Posted by Jesus Caritas Est at 9:44 AM