Greetings to Say a Happy Birthday to Pope Francis from around the World as he turns 83 today! 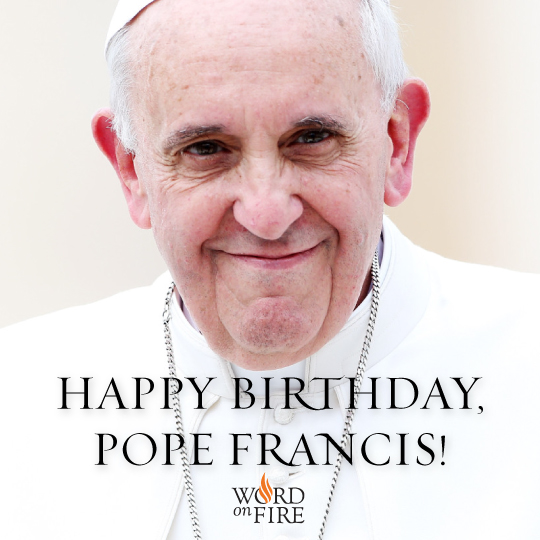 VaticanNews Report:
Happy Birthday Pope Francis
Greetings have been arriving from around the world this 17th December as the Pope celebrates his 83rd birthday.
Pope Francis on Tuesday is marking his 83rd Birthday. It was only last Friday that the Pope celebrated the 50th anniversary of his ordination to the priesthood.

On the occasion of his birthday, the Pope has been receiving messages of congratulations from all over the world.

In a greeting to Pope Francis, the President of Italy, Sergio Matterella said he was particularly pleased to send the “most sincere and affectionate wishes” on this 83rd Birthday.

In his message, the President said the Pope’s incessant pastoral activity was “the crowning achievement of fifty years of generous priestly service”. He added that, the Pontiff’s voice was one that “continues to urge peoples and nations to overcome divisions, to preserve peace, to engage in dialogue..."

In a message from the Association of Italian Christian Workers (ACLI), the President of the Rome branch, Lidia Borzi thanked the Pope “for having enlightened our gaze, helping us to focus on the need to meet and sustain frailties.”

A special greeting also came all the way from Ireland and was posted on the website of the Irish Bishops Conference. It was from Eliza Long aged 8 from Co Meath. Eliza who is preparing for her first Holy Communion thanked the Pope “for his prayers for all the children across the world. She also assured him that “she is praying for him too.”

Last year, the Pope chose to celebrate his birthday by throwing a small party for himself and a group of children who were receiving medical care from the “Santa Marta” Paediatric Dispensary inside the Vatican. The children surprised him with a huge cake and the Pope thanked them, expressing how glad he was to be with them.

Jorge Mario Bergoglio was born in Buenos Aires on December 17, 1936, the son of Italian immigrants. In 1958 he joined the Jesuit Order. In 1998 he was appointed Archbishop of Buenos Aires by Pope John Paul II. Since his election on 13 March 2013 Pope Francis has been the 266th Bishop of Rome.
FULL TEXT Source: VaticanNews.va