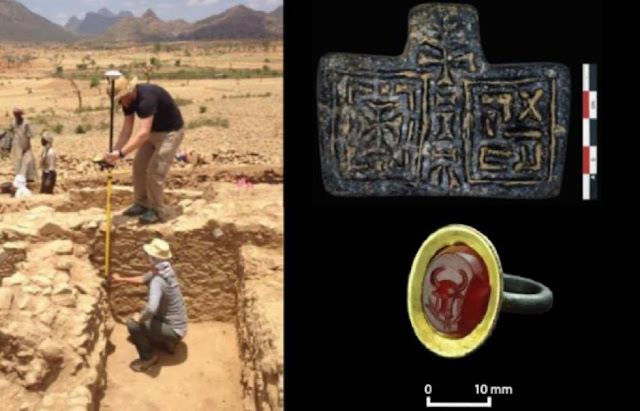 ChristianPost reports that the remains of a 1,700-year-old Christian basilica have been uncovered in Ethiopia, giving archaeologists new insight into when Christianity arrived in sub-Saharan Africa.

The Roman-style basilica, from the fourth century A.D., was found in Beta Samati, an ancient town that was once part of the Aksumite civilization, according to a paper published in Antiquity. The remains of the 60 feet long, 40 feet wide building dates back to the time when Christianity became the official religion of the Aksumite empire.
Originally developed by the Romans for administrative purposes, the oldest-known Christian church in sub-Saharan Africa was likely adopted by Christians at the time of Constantine for their places of worship.
The Smithsonian reports: An international assemblage of scientists discovered the church 30 miles northeast of Aksum, the capital of the Aksumite kingdom, a trading empire that emerged in the first century A.D. and would go on to dominate much of eastern Africa and western Arabia. Through radiocarbon dating artifacts uncovered at the church, the researchers concluded that the structure was built in the fourth century A.D., about the same time when Roman Emperor Constantine I legalized Christianty in 313 CE and then converted on his deathbed in 337 CE. The team detailed their findings in a paper published today in Antiquity.

Although Christianity had reached Egypt by the third century A.D., it was not until Constantine’s legalization of Christian observance that the church expanded widely across Europe and the Near East, notes the Smithsonian. Thanks to their new discovery, researchers “can now feel more confident in dating the arrival of Christianity to Ethiopia to the same time frame."


Both secular and religious artifacts were discovered in and around the basilica, including a gold ring, cattle figurines, crosses, stamp seals, and tokens that were likely used for trade and administration.
Edited from the Smithsonian and Christian Post - Image Source: Google Images - Ancient-origins
Posted by Jesus Caritas Est at 9:59 AM