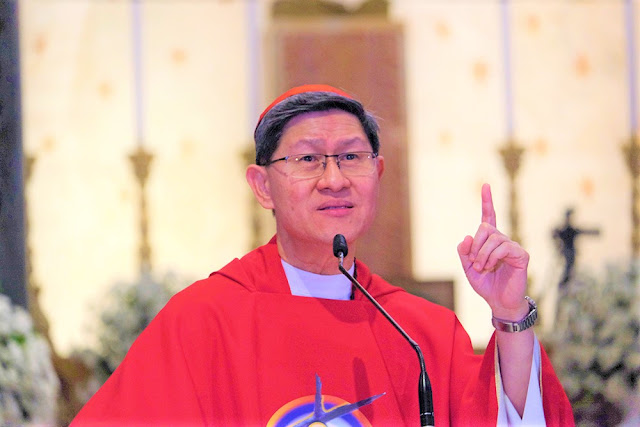 Pope Francis has tapped Cardinal Luis Antonio Tagle of Manila as the new Prefect of the Congregation for the Evangelization of Peoples.

The appointment was announced in Rome on Sunday at 12 noon (7pm in the Philippines).

Tagle will replace Cardinal Fernando Filoni, who assumed as the new Grand Master of the Order of the Holy Sepulcher.

With the nomination of Tagle, an Asian cardinal returned to the leadership of the important department for evangelization after Indian Cardinal Ivan Dias, who served the post from 2006 to 2011.

Announced a few days before the end of his trip to Thailand and Japan, the Vatican News said that Pope Francis “once again shows great attention to the Asian continent.”

Born in Manila in 1957, Tagle took his Philosophy and Theology at the Ateneo De Manila University’s San Jose Major Seminary. He was ordained priest for the Imus diocese in 1982.

From 1985 to 1992, he was sent to further studies at the Catholic University of America in Washington D.C. where he got his Doctorate in Sacred Theology.

He also spent seven years in Rome to deepen his studies and in 1997 joined the International Theological Commission.

While serving as rector of the Imus cathedral in 2001, he was named bishop of the diocese at the age of 44 by Saint John Paul II in October 2001.

In October 2011, Pope Benedict XVI appointed him as Archbishop of Manila, and 13 months later, during the last consistory of the pontificate of Pope Ratzinger, he received the cardinal’s hat.

In addition to leading the archdiocese, Tagle has also been serving since 2015 as president of Caritas Internationalis, a confederation of Catholic charities around the world.

As Caritas head, his activities have been as numerous as in the past. He travels throughout the world to visit Caritas projects.

As a theologian, he is also a much-sought-after conference giver.

Tagle is the second Filipino to become prefect of a dicastery, following the late Cardinal Jose Tomas Sanchez, who served as prefect of the Congregation for the Clergy from 1991 until 1996.

Sanchez also served as secretary of the Propaganda Fide, which will soon be headed by Tagle.

The cardinal is set to be installed at his new post in the Vatican at the beginning of 2020, according to Vatican News.
Full text Source: CBCP News - Image Google Images
Posted by Jesus Caritas Est at 12:34 PM