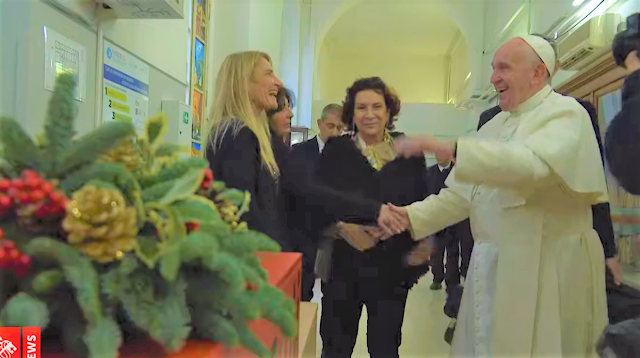 The Pope was accompanied by the Director of L'Osservatore Romano, Andrea Monda, a former religion teacher at the school; along with the Dean of the Institute. He greeted the teachers, staff, and students who had written the texts of the meditations for the Way of the Cross on Good Friday 2018.

He entered the schoolyard, where he was welcomed by the approximately 800 students of the institute. After a song performed by some students and a greeting from the Headmaster, the Holy Father addressed a few words to the young people, in response to their questions.

He spoke of loneliness, which when lived badly leads to sadness; and of freely-given love, a difficult road, that requires “trimming oneself back”, of patience, of “small sacrifices”.

In response to a question about the coexistence of different cultures and religions, Pope Francis spoke about migration, even in his own country, Argentina, and how it has led to the need to live together in harmony. In addressing non-believers, he stressed the value of witness so as to awaken curiosity about the Gospel and faith.

Responding to a question regarding what makes a “true teacher”, the Pope reminded the young people of the importance of playing and dreaming, which “brings oxygen to the soul”. He then reflected on the relationship between teachers and students – a gift that he himself was able to recall recently when speaking about his spiritual father, Miguel Ángel Fiorito.

When the bell rang, the Pope wished the young people and those present a Merry Christmas and, before leaving, answered one last question from a young person about the contradiction of using war to create peace and security. Citing the tragic situations in some countries, the Pope referenced his video message on the theme of peace, recorded with the Secretary General of the United Nations at the end of their meeting in the Vatican on Friday.