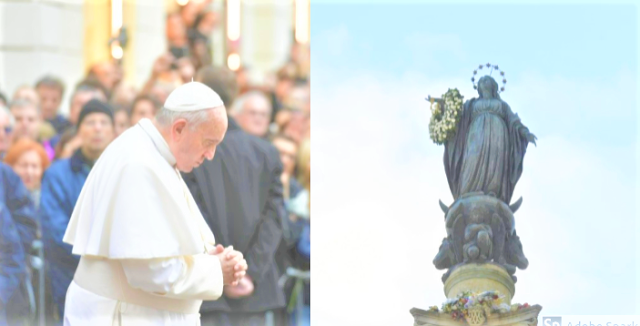 During his Sunday Angelus address in St Peter’s Square, Pope Francis announced he would be visiting Piazza di Spagna to perform what he called “the traditional act of homage at the foot of the monument to the Immaculate Conception”. He asked all those present to join him spiritually in this gesture, which, he said, “expresses our filial devotion to our heavenly Mother”.

Blessed Pius IX
The statue of Our Lady stands above a 12-metre high ancient Roman column. It was placed here on September 8th 1857 and commemorates Pope Pius IX’s proclamation of the dogma of the Immaculate Conception, stating that Mary is the only human being who was born without original sin.

Venerable Pius XII
The column and statue were originally erected with the help of 220 firemen, which is why the floral tributes always include a garland of flowers placed in Our Lady’s arms by a member of Rome’s fire department. The tradition of offering flowers to her image here on this feast day was begun by Pope Pius XII.

Pope Francis
When he arrived in Piazza di Spagna on Sunday afternoon, Pope Francis addressed his own prayer to Our Lady at the foot of the monument. He entrusted to her all those in Rome and throughout the world, who are burdened “by discouragement because of sin; those who think there is no longer hope for them, that their sins are too many and too great, and that God certainly does not have time to waste with them”.

The Pope thanked our Immaculate Mother for reminding us that, because of Jesus’ love “we are no longer slaves to sin, but free, free to love, free to love one another, to help one another as brothers and sisters, despite our differences”.

Below please find the unofficial Vatican News translation of the Holy Father’s prayer:

O Mary Immaculate,
we gather around you once again.
The more we move forward in life
the more our gratitude to God increases
for giving as a Mother to us who are sinners,
you, the Immaculate Conception.
Of all human beings, you are the only one
preserved from sin, as Mother of Jesus,
the Lamb of God who takes away the sin of the world.
But this singular privilege of yours
was given to you for the good of us all, your children.
In fact, looking at you, we see the victory of Christ,
the victory of God's love over evil:
where sin abounded, namely, in the human heart,
grace has overflowed all the more,
through the gentle power of Jesus’ Blood.
You, Mother, remind us that we are sinners,
but we are no longer slaves to sin!
Through His Sacrifice, your Son
has broken the rule of evil, and has overcome the world.
This tells all generations about your heart,
clear as the sky where the wind has dissipated every cloud.

And so you remind us that being sinners and being corrupt
is not the same thing: it's very different.
It is one thing to fall, but then, repenting,
to get up again with the help of God's mercy.
Something else is hypocritical conspiracy with evil,
corruption of the heart, that appears faultless on the outside,
but inside, is full of evil intentions and nasty selfishness.
Your crystal-clear purity calls us back to sincerity,
transparency, simplicity.
How much we need to be liberated
from corruption of heart, which is the greatest danger!
This seems impossible to us, we are so accustomed to it,
yet it is within easy reach. It is enough to look up
at your Mother's smile, at your unspoiled beauty,
to feel once more that we are not meant for evil,
but for good, for love, for God!

For this reason, O Virgin Mary,
today I entrust to you all those who, in this city
and throughout the world, are burdened by disillusionment,
by discouragement because of sin;
those who think there is no longer hope for them,
that their sins are too many and too great,
and that God certainly does not have time to waste with them.
I entrust them to you, because not only are you a Mother
and as such, you never stop loving your children,
but you are also Immaculate, full of grace,
and you can reflect into the darkest gloom
a ray of the Risen Christ’s light.
He, and He alone, breaks the chains of evil,
frees from the most acute dependencies,
unties from the most criminal bonds,
softens the hardest of hearts.
And if this happens within people,
how the face of the city changes!
In small gestures and big choices,
vicious circles gradually become virtuous,
the quality of life improves
and the social climate becomes more breathable.

We thank you, Immaculate Mother,
for reminding us that, because of Jesus Christ’s love,
we are no longer slaves to sin,
but free, free to love, to love one another,
to help one another as brothers and sisters, despite our differences —
and thank you for the differences between us.
Thank you, because with your purity, you encourage us
not to be ashamed of good, but of evil;
you help us to keep at a distance the evil one,
who deceives us and draws us to himself, into coils of death;
you grant us the gentle reminder that we are children of God,
Father of immense goodness,
eternal source of life, beauty and love. Amen.
Full Text Source: VaticanNews.va + Image Source: Vatican.va
Posted by Jesus Caritas Est at 5:42 PM