Pope Francis quotes St. John Henry Newman "May each Christmas, as it comes, find us more and more like Him, who at this time became a little child for our sake, more simple-minded, more humble, more holy..." Full Text to Curia 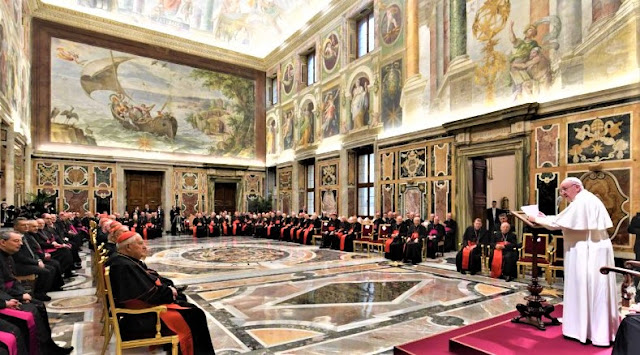 [2] Quis dives salvetur 37, 1-6.
[3] Sermon 7, “The Mystery of Godliness”, Parochial and Plain Sermons, V.
[4] Ibid.
[5] Chapter 1, Section 1, Part 7.
[6] In one of his prayers, Newman writes: “There is nothing stable but Thou, O my God!  And Thou art the centre and life of all who change, who trust Thee as their Father, who look to Thee, and who are content to put themselves into Thy hands.  I know, O my God, I must change, if I am to see Thy face!” (Meditations and Devotions, XI, “God Alone Unchangeable”).
[7] Newman describes it like this: “I was not conscious to myself, on my conversion, of any change, intellectual or moral, wrought in my mind... it was like coming into port after a rough sea; and my happiness on that score remains to this day without interruption” (Apologia Pro Vita Sua, 1865, Chapter 5, 238.  Cf. J. HONORÉ, Gli aforismi di Newman, LEV, 2010, 167).
[8] Cf. J. M. BERGOGLIO, “Lenten Message to Priests and Religious”, 21 February 2007, in In Your Eyes I See my Words: Homilies and Speeches from Buenos Aires, Volume 2: 2005-2008, Fordham University Press, 2020.
[9] Cf. Apostolic Constitution Veritatis Gaudium (27 December 2017), 3: “In a word, this calls for changing the models of global development and redefining our notion of progress.  Yet the problem is that we still lack the culture necessary to confront this crisis. We lack leadership capable of striking out on new paths”.
[10] Interview given to Father Antonio Spadaro, Civiltà Cattolica, 19 September 2013, p. 468.
[11] Schreiben an das Pilgernde Volk Gottes in Deutschland, 29 June 2019.
[12] Cf. Address to the Curia, 22 December 2016.
[13] Apostolic Exhortation Evangelii Nuntiandi (8 December 1975), 14.  Saint John Paul II wrote that missionary evangelization “is the primary service which the Church can render to every individual and to all humanity in the modern world, a world which has experienced marvellous achievements but which seems to have lost its sense of ultimate realities and of existence itself” (Encyclical Letter Redemptoris Missio, 7 December 1990, 2).
[14] Cf. Address to Participants at the International Pastoral Congress on the World’s Big Cities, Consistory Hall, 27 November 2014.
[15] Motu Proprio Porta Fidei, 2.
[16] Benedict XVI, Homily, 28 June 2010; cf. Motu Proprio Ubicumque et Semper, 17 October 2010.
[17] An epochal change was noted in France by Cardinal Suhard (we can think of his pastoral letter Essor ou déclin de l’Église, 1947) and by the then-Archbishop of Milan, Giovanni Battista Montini.  The latter also questioned whether Italy was still a Catholic country (cf. Opening Address at the VIII National Week of Pastoral Updating, 22 September 1958, in Discorsi e Scritti milanesi 1954-1963, vol. II, Brescia-Roma 1997, 2328).
[18] Saint Paul VI, some fifty years ago, when presenting the new Roman Missal to the faithful, recalled the correspondence between the law of prayer (lex orandi) and the law of faith (lex credendi), and described the Missal as “a demonstration of fidelity and vitality”.  He concluded by saying: “So let us not speak of a ‘new Mass’, but rather of ‘a new age in the life of the Church’” (General Audience, 19 November 1969).  Analogously, we might also say in this case: not a new Roman Curia, but rather a new age.
[19] Evangelii Gaudium states the rule: “to give priority to actions which generate new processes in society and engage other persons and groups who can develop them to the point where they bear fruit in significant historical events.  Without anxiety, but with clear convictions and tenacity” (No. 223).
[20] Interview with Georg Sporschill, S.J. and Federica Radice Fossati Confalonieri: Corriere della Sera, 1 September 2012.
FULL TEXT +ImageSource: Vatican.va - Official Translation
Posted by Jesus Caritas Est at 8:47 AM

Thank you so much for this Christmas gift of an official translation into English of the text of the 2019 Christmas message of Pope Francis to the College of Cardinals in the Sala Clementina, an excellent voice over in English in the video of that audience, and the video itself. I am a lay person living in a place in the USA six time zones west of Rome who visited there only once, in March 2003. Your media thus give a sense of closeness to the reality of the Vicar of Christ -- and the tenderness and humility of the love that Jesus the Christ has for all of us. Buon Natale!