RIP Archbishop Emeritus André Gaumond of the Archdiocese of Sherbrooke, Québec - Death at the age of 82 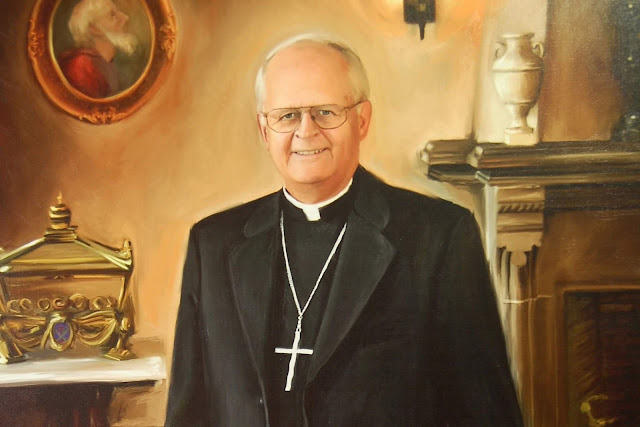 Archbishop Gaumond was born on 3 June 1936 in Saint-Thomas de Montmagny, Québec, and ordained a priest for the Diocese of Sainte-Anne-de-la-Pocatière on 27 May 1961 following the completion of his theological formation at Saint Paul Seminary, Ottawa. After pursuing further studies in philosophy at the Institut catholique de Paris in France, he taught apologetics and philosophy at the Collège Sainte-Anne-de-la-Pocatière (1961-1969). Later he taught philosophy and then served in the office of adult education (Service de l'éducation aux adultes) at the Cégep de La Pocatière (1969-1980). Before being named Bishop, he served as the seasonal pastor at Lac-Trois-Saumons (1975-1981) and as pastor for the communities of Saint-Pamphile and Saint-Omer (1981-1985). On 31 May 1985, he was appointed Bishop of the Diocese of Sainte-Anne-de-la-Pocatière and was ordained Bishop on 15 August 1985. On 16 February 1995, he was named Coadjutor Archbishop of the Archdiocese of Sherbrooke, and succeeded as Archbishop of Sherbrooke on 1 July 1996, where he served for 15 years until Pope Benedict XVI accepted his resignation 26 July 2011 upon his reaching the age of 75, as required by the Code of Canon Law.

As a member of the Canadian Conference of Catholic Bishops (CCCB), Archbishop Gaumond served as a member of the former Commission for Ministries and the Apostolate (1987-1991), the former Commission for Relations with Associations of Priests, Religious and Laity (1989-1993), the then Commission for Theology (1991-1995), the former Programs and Priorities Committee (1997-1999), the former Commission Associations of the Clergy, Consecrated Life and Laity (2001-2005), and the Committee for Canon Law (2008-2011). He also served one term as Chairman of the former Commission for the Evangelization of the Peoples, 1997-1999. He likewise served on the Permanent Council as a regional representative (1991-1995), and was then elected CCCB Co-Treasurer (1999-2003), Vice President (2003-2005) and President (2005-2007). For a number of years, beginning in 2009, Archbishop Gaumond represented the CCCB as its liaison with French-language seminaries and formation centres for priests. During his episcopacy, he also served in various capacities with the Quebec Assembly of Catholic Bishops (Assemblée des évêques catholiques du Québec), including as Vice President (1993-1995) and as President (1996-1997).

Archbishop Gaumond will lie in state at Saint-Michel Cathedral-Basilica, 130 Cathédrale Street in Sherbrooke, Thursday, 19 December, from 7:00 to 10:00 p.m., with a Liturgy of the Word at 8:00 p.m. The funeral Mass will be celebrated on Friday, 20 December at 11:00 a.m. in the Cathedral-Basilica which will be open to the public beginning at 9:00 a.m.
Full Text Source: CCCB.ca
Posted by Jesus Caritas Est at 10:27 AM