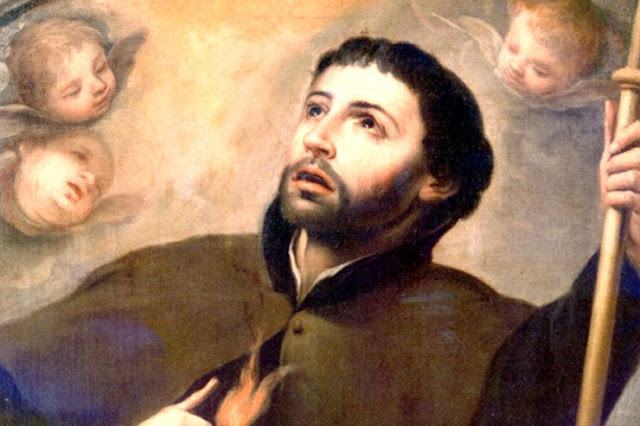 O devoted Servant of God, Saint Francis Xavier, your heart was burning with love for Jesus. Impelled by his love, you went from country to country and spent yourself unto death to proclaim the name of Jesus and the good news of salvation. That is why the Father filled you with glory in heaven and preserved your body from corruption here on Earth. Filled with joy for these unique gifts, we join you in praising the Father.


And Now we ask your intercession for ourselves. ( Each one makes ones’s intention silently ) We ask you to obtain for us the fulfilment of these desires if they are pleasing to the Father. And for everything together with you we praise the Father, through Jesus in the Spirit. Amen.
Born in the Castle of Xavier near Sanguesa, in Navarre, 7 April, 1506; died on the Island of Sancian near the coast of China, 2 December, 1552. In 1525, having completed a preliminary course of studies in his own country, Francis Xavier went to Paris, where he entered the college de Sainte-Barbe. Here he met the Savoyard, Pierre Favre, and a warm personal friendship sprang up between them. It was at this same college that St. Ignatius Loyola, who was already planning the foundation of the Society of Jesus, resided for a time as a guest in 1529. He soon won the confidence of the two young men; first Favre and later Xavier offered themselves with him in the formation of the Society. Four others, Lainez, Salmeron, Rodriguez, and Bobadilla, having joined them, the seven made the famous vow of Montmartre, 15 Aug., 1534.