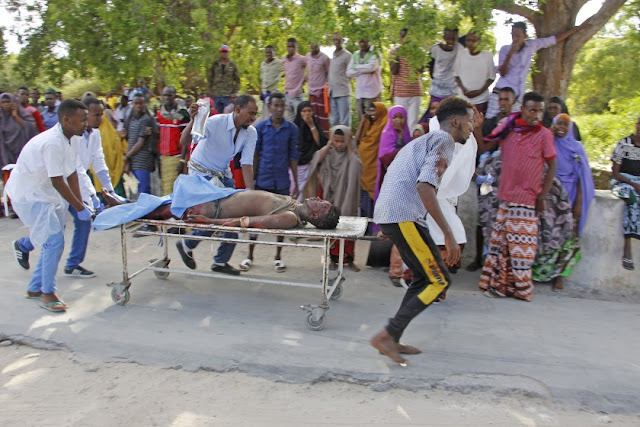 A Truck bomb in the capital of Somalia has killed over 80 people.

CBC news reports that most of those killed were university and other students returning to class, and police officers.

The blast occurred during rush hour as Somalia returned to work after its weekend. At least 125 people were wounded, Aamin Ambulance service director Abdiqadir Abdulrahman said, and hundreds of Mogadishu residents donated blood.

President Mohamed Abdullahi Mohamed condemned the attack as a "heinous act of terror" and blamed the al-Shabaab extremist group, which is linked to al-Qaeda and whose reach has extended to deadly attacks on luxury malls and schools in neighbouring Kenya.

Bodies lay on the ground and at a hospital, families and friends examined the dozens of the dead.

The vehicle detonated after police at the checkpoint blocked it from proceeding into the city.

There was no immediate claim of responsibility, but  al-Shabaab often carries out such attacks. The extremist group was pushed out of Mogadishu several years ago but continues to target high-profile areas, such as checkpoints and hotels in the seaside city.
Edited from CBC News
Vatican News reported that Pope Francis prayed for the victims during the Angelus.
“Let us pray to the Lord for the victims of yesterday’s horrible terrorist attack in Mogadishu in Somalia, where the explosion of a car bomb killed more than 70 people”, he said. The Pope also promised his closeness to “all of their family members and those who mourn their deaths”.
Posted by Jesus Caritas Est at 6:34 PM