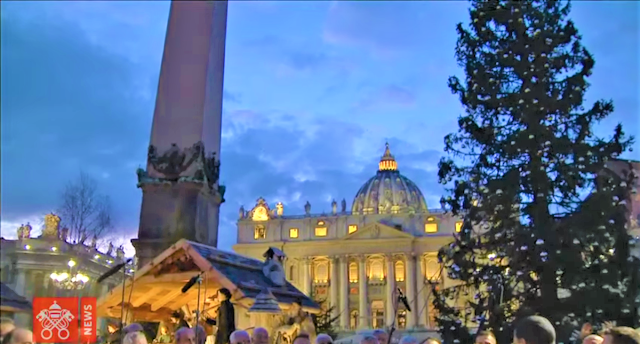 St. Peter shines with the lights of Christmas symbols

This afternoon, in St. Peter's Square, the traditional inauguration of the Crib and the lighting of the Christmas tree. The ceremony was presided over by Cardinal Giuseppe Bertello, and by Monsignor Fernando Vérgez Alzaga, respectively President and Secretary General of the Governorate of the Vatican City State


The opening of the crib and the lighting of the Christmas tree in Piazza San Pietro, is a tradition that also appeals to adults. Introduced in 1982 by John Paul II, it has accompanied and invited Romans, tourists and pilgrims from all over the world for 37 years. And for many, it has become an event not to be missed.


To donate the nativity scene and the tree, respectively Scurelle, in the province of Trento, and Rotzo, on the Asiago plateau: two of the numerous municipalities profoundly marked by the storm that in 2018 devastated entire forests of the Triveneto. Today's meeting of Pope Francis with the donors of the two Christmas symbols was an occasion of encouragement from the Pope for the populations of these affected areas, but also for common reflection:

Today's meeting offers me the opportunity to renew my encouragement to your people, who last year suffered a devastating natural disaster, with the destruction of entire wooded areas. These are events that frighten us, they are alarm signals that creation sends us, and that ask us to take effective decisions immediately to safeguard our common home.

Piazza San Pietro with the illuminated nativity scene and tree

It is the amazement that accompanies the lighting of the crib lights and the Christmas tree. Smiles and bright eyes mark the faces of everyone, the youngest and the oldest, to give reason to the words of Francis in the letter "Admirabile signum":

The admirable sign of the crib, so dear to the Christian people, always arouses astonishment and wonder. With this letter I would like to support the beautiful tradition of our families, who prepare the crib in the days before Christmas. As well as the custom of setting it up in workplaces, schools, hospitals, prisons, squares ... It is truly an exercise in creative imagination, which uses the most disparate materials to create small masterpieces of beauty.
Source: VaticanNews.va - Italian
Posted by Jesus Caritas Est at 9:42 AM