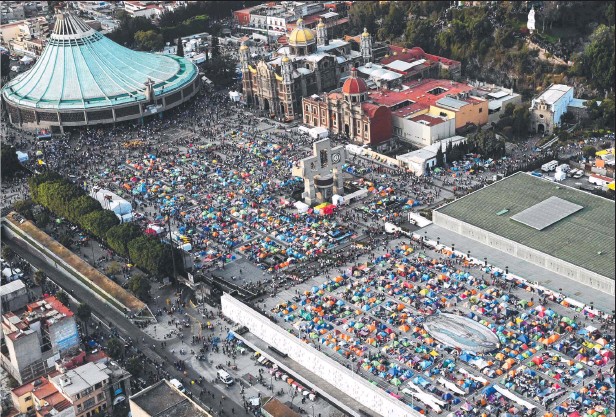 Another record at the largest Catholic place of pilgrimage -
At the Guadalupe Shrine in Mexico, the largest Catholic pilgrimage site in the world, the influx of pilgrims on the feast day of the Mexican Madonna continues. From the beginning of the week to noon on December 12 alone, 10,868,737 people entered the Guadalupe Basilica, the authorities of Mexico City announced on Thursday afternoon (local time) according to the portal heraldodemexico.com.mx, further pilgrims were expected for the afternoon and evening hours , The previous year's record was again set - -10.6 million pilgrims in 2018, 7.3 million in 2017.

In the basilica built in 1974, contains the cloak displayed above the altar, which shows the well-known image of Our Lady. According to the Archdiocese of Mexico City, 15,600 people an hour are using the conveyor belts that run directly beneath this for the visitors, with many pilgrims contenting themselves with seeing the picture from afar and then leaving the church due to the large crowds. Hundreds of thousands of pilgrims had reached their destination in foot marches lasting days to weeks, many of them with Mary statues, pictures or flags.

The Archbishop of Mexico City, Cardinal Carlos Aguiar Retes, celebrated the "Rose Mass" on Thursday afternoon. It commemorates the moment when the Indio Juan Diego on 12 December 1531 presented the then Bishop Fray Juan de Zumarraga (1468-1548) with roses picked on behalf of Saint Mary as proof of the truth of his apparitions, whereupon the cloak of Guadalupe's grace became visible. At that time, the Virgin of Guadalupe announced her presence to the people at a "moment of the worst signs of deterioration in the indigenous cultures of our country" and had shown herself as a mother, the cardinal said. In order to heal today's "wounds" in society, loving relationships must be strengthened, starting with the families.

The rector of the Guadalupe Basilica, Salvador Martinez Avila, referred to the high crime and insecurity in Mexico, which according to observers has long since reached the extent of a continuing "war". These developments are not accidental, but are "signs of a sick society". The "fever" of unemployment and international migration, which Mexico has been dealing with "caravans" for a year, are symptoms of a "bad infection in the heart of the world". Mary of Guadalupe gather people at their sanctuary "to show that now is the time to be saved," said Martinez.

This Marian feast is celebrated worldwide  on December 12 and is enjoying increasing popularity. In the Vatican, where the image of Our Lady has found its way into the crypt of St. Peter's Basilica, Pope Francis celebrated one floor up the Mass for Latin America, which has become a tradition since 2012, with priests, seminarians, believers and embassy representatives from South American countries living in Rome. As he emphasized, the Virgin of Guadalupe bore the features of a mestizo, i.e. a descendant of European and indigenous ancestors.

Maria had become "mestizo to be mother of all nations and mother of all," said the Pope. Her work also led to God becoming a mestizo in a different sense, since her son Jesus Christ was "true God and true man" in Christian doctrine.
Edited from Kath.net - Image Source: Google Images - Pilgrim Reader
Posted by Jesus Caritas Est at 1:54 PM