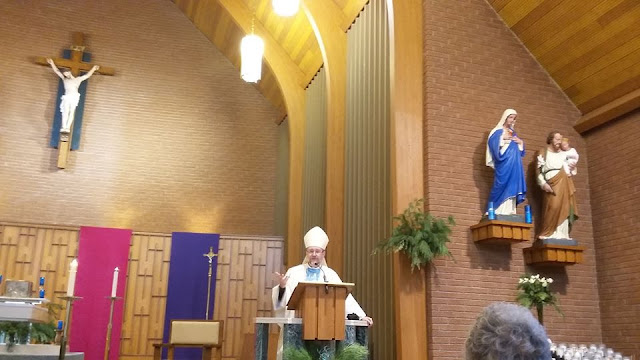 Bishop Thomas Dowd, Auxiliary of Montreal, gave a Parish Mission in Barry's Bay, Ontario, in the Diocese of Pembroke, over several days. Each day of the mission Bishop Dowd con-celebrated Holy Mass with Fr. Patrick Dobec, Fr. John Lacey and the other priests of the area. There were also priests offering confession for the participants of the mission.
During the evening missions talks he began by presenting 4 basic questions:

1. Who is God?
2. If God is good why is there evil in the world?
3. Given there is evil what has God done about it?
4. If God is dealing with evil how do we get on board?
The first evening the subject was "Our Questioning Hearts." "Men expect from the various religions answers to the unsolved riddles of the human condition which today, even as in former times, deeply stir the hearts of men."
He said, "God's very substance is Love!"
Bishop Dowd then explained, "The Trinity is not just a communion of Persons, but of loving Persons. It is love that binds the Trinity into a perfect Unity, while the nature of God as love flows naturally into a Trinity."

Bishop Dowd explained the "universal truths about God" by quoting Vatican Council I, Dei Filius:
The holy, Catholic, Apostolic, Roman Church believes and confesses that there is one, true, living God, Creator and Lord of heaven and earth, omnipotent, eternal, immense, incomprehensible, infinite in intellect and will, and in every perfection; who, although He is one, singular, altogether simple and unchangeable spiritual substance, must be proclaimed distinct in reality and essence from the world; most blessed in Himself and of Himself, and ineffably most high above all things which are or can be conceived outside Himself.
Using the Catechism of the Catholic Church he clarified the "Immediate consequences of original sin:
400 The harmony in which they had found themselves, thanks to original justice, is now destroyed: the control of the soul's spiritual faculties over the body is shattered; the union of man and woman becomes subject to tensions, their relations henceforth marked by lust and domination.282 Harmony with creation is broken: visible creation has become alien and hostile to man.283 Because of man, creation is now subject "to its bondage to decay".284 Finally, the consequence explicitly foretold for this disobedience will come true: man will "return to the ground",285 for out of it he was taken. Death makes its entrance into human history.286

The Bishop explained a difficult concept namely, "Moral evil" saying "Angels and men, as intelligent and free creatures, have to journey toward their ultimate destinies by their free choice and preferential love. They can therefore go astray. Indeed, they have sinned. Thus has moral evil, incommensurably more harmful than physical evil, entered the world.
He emphasized the Catechism teaching that,

"God is in no way, directly or indirectly, the cause of moral evil.176 He permits it, however, because he respects the freedom of his creatures and, mysteriously, knows how to derive good from it:" (CCC 311)
Quoting the Second Vatican Council document Nostra Aetate, he said,
2. From ancient times down to the present, there is found among various peoples a certain perception of that hidden power which hovers over the course of things and over the events of human history; at times some indeed have come to the recognition of a Supreme Being, or even of a Father. This perception and recognition penetrates their lives with a profound religious sense.

We know God through the beauty of creation:
He then mentioned St. Augustine who said:
The Bishop also explained that "The Biblical concept of "Judgement" is therefore fundamentally positive - it is a call to repentance but also a promise of rescue from oppression". He said as the "generations passed, paganism set in - a confusion between the beautiful works God created, and the God created them (Wisdom 13, 1-9). He emphasized a key concept of "proportionality" saying "God's mode of self-revelation therefore must now begin slowly, according to our proportional capacity to receive it, and increasing as we grow in that proportionality (whether as individuals or as a culture)" He continued that we should recall that "..through original sin, this capacity to receive God's revelation is now subject to lots of earthly distractions."
The last day of the mission examined the question  "If God is dealing with evil how do we get on board?"
The community of Barry's Bay and surrounding areas were very receptive to the Bishop's talks and many left with a renewed understanding of God.
(Photo and Article written by Miriam Westen)
Posted by Jesus Caritas Est at 12:49 PM