BREAKING Death Toll Rises to 53 People Killed and 175,000 Displace by Floods in Indonesia 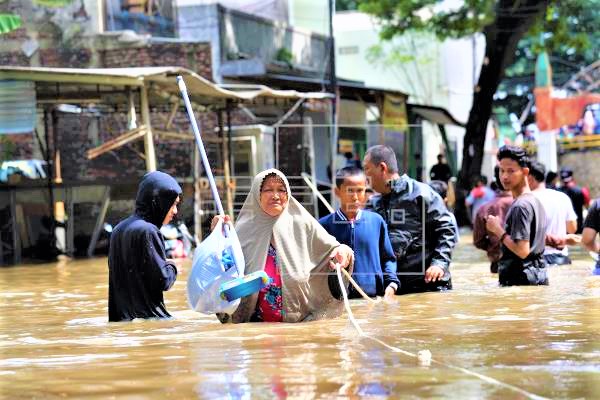 Asia News IT: More victims and displaced people in Jakarta. Environmentalists: alarm bells ignored
The rains killed at least 53 people and displaced 175 thousand inhabitants.  There are around 11,000 health workers and soldiers on the ground to reduce the risk of outbreaks.  Experts: “There is no environmental awareness.  When the water withdraws, climate change will no longer be discussed. "


Jakarta (AsiaNews / Agencies) - The death toll from the violent floods and landslides that hit the region of Jakarta in Indonesia is rising hour by hour.  Agus Wibowo, a spokesman for the National Disaster Reduction Agency, reports that there are 53 dead and at least 175,000 people displaced.  Many have found refuge in camps and shelters set up around the disaster area, where sanitation is collapsing.

Meanwhile, activists and environmentalists denounce the government for ignoring the warning signs of climate change.

The rains began to fall heavily on New Year's Eve and in a short time they flooded the area of ​​the Indonesian capital.  The metropolitan area of ​​Jakarta is one of the most populated in the world with around 30 million inhabitants.  The areas close to the coast are subject to frequent flooding due to the constant sinking below sea level.  For this reason the government has planned to move the capital to Borneo, in a higher area and at a lower risk of natural catastrophe.

In the past few hours, the Ministry of Health has deployed around 11,000 health workers and soldiers to distribute medicine, personal hygiene kits and food.  The goal is to prevent the outbreak of hepatitis A epidemics, dengue fever and other diseases, including infections caused by contact with animal carcasses.

According to experts, the natural disaster of this early 2020 is the worst since 2013, when dozens of people died from the monsoon rainfall that flooded the city.  For environmentalists, yet another environmental disaster should be a "wake-up call" for climate change in one of the most polluting countries for greenhouse gases (fifth worldwide).

However, Yuyun Harmono, head of the Indonesian Forum for the Environment, points out that the administration has proven reluctant to deal with disasters and appears to have no intention of reducing polluting emissions.  Floods, he continues, "should serve as a powerful reminder that things cannot be dealt with as usual."

According to a 2019 survey, the country's environmental vulnerability is scarcely considered by the population: only 18% of respondents believe that there is a correlation between human activity and climate change.  Nirwono Joga, a researcher at the Urban Studies Center in Jakarta, "there aren't many people who realize the impact of climate change.  When the water retreats and people return to their homes, actions that are being talked about to combat climate change will also be forgotten. "
Full Text Source: AsiaNewsIT