BREAKING Egyptian President Al Sisi joins Patriarch Tawadros at Coptic Christmas "If we love God, we must love each other" 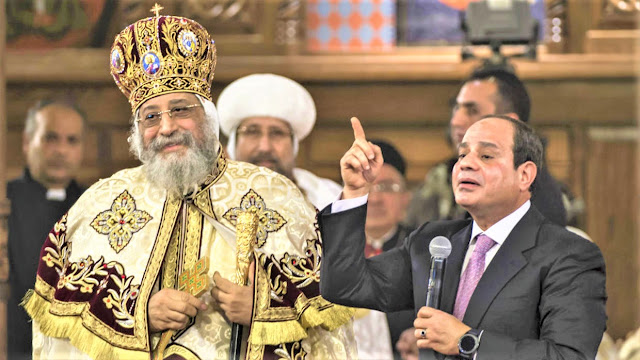 AFRICA/EGYPT - Al Sisi at the vigil of Coptic Christmas: "If we love God, we must love each other"
Tuesday, 7 January 2020

Cairo (Agenzia Fides) - "Let us continue in an honorable way, in a time without honor, and we believe that God will make honorable people victorious". Thus Egyptian President Abdel Fattah al Sisi expressed himself in his speech before Patriarch Tawadros and bishops, priests, religious and the multitude of faithful gathered in the Cathedral dedicated to the Nativity, in the new administrative capital of Egypt, on the occasion of his participation at the Christmas vigil, celebrated by the Coptic Church on the evening of Monday 6 January.
For six years, the Egyptian President has been attending the Christmas vigil liturgy celebrated by the Coptic Orthodox Patriarch. This circumstance, again this year, provided al Sisi with the opportunity to express considerations addressed not only to the Coptic community, but to the whole nation, with words of patriotic inspiration and calls on all Egyptians to overcome divisions and make common front against pitfalls from outside. "As long as we are united", said the Egyptian President, "we should not worry, and we should only take care of those around us". The political leader also stressed that "if we love God, we must love each other, and we must not allow anyone to sow discord among us". Referring to the tensions and conflicts in the Middle Eastern region, al Sisi also pointed out that Egypt could have been pulled into devastating crises, as has happened and is happening in other nations in the area. "But as long as we are united", added the Egyptian President - "no one can drag us into such situations".
After his speech, and before leaving the liturgical assembly, the Egyptian President offered Pope Tawadros II a bouquet of flowers on behalf of all Egyptians, greeting him before leaving mass.
The new Coptic cathedral dedicated to the Nativity of Jesus is located in the urban area 45 km from Cairo destined to become the new administrative capital of Egypt. Representatives of the Sunni University of al Azhar and numerous Egyptian government representatives also took part in the liturgy, including Premier Mostafa Madbouly.
The same cathedral, officially inaugurated last year (see Fides, 4/1/2019), also wants to represent a symbol of the political strategy with which al Sisi intends to ensure the solidarity of the Coptic Church to itself and to its political project. The current Egyptian Presidency contributed directly with 100 thousand Egyptian pounds to the first financing of the huge urban works. According to the Egyptian leader, the new place of worship represents "a message for Egypt and for the whole world". Egyptian media present the new Coptic cathedral as "the largest church in the Middle East". The architectural design of the cathedral, faithful to the Coptic tradition, wants to recall the profile of Noah's Ark, and thus re-propose the image of the Church as a "boat" of salvation that sails through the hardships of history, towards the heavenly destination of Paradise.
In the urban plan of the new administrative capital, al Sisi wanted to include the construction of the largest mosque in the Country, with the aim of presenting the cathedral and mosque as symbols of coexistence and national unity. (GV) (Full Text Source: Agenzia Fides, 7/1/2020)
Posted by Jesus Caritas Est at 10:50 AM