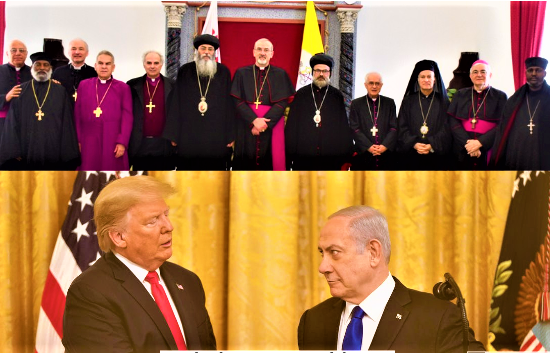 A Statement by the Patriarchs and Heads of Churches in Jerusalem on the “Deal of the Century”
After a thorough consideration of the United States of America’s Middle East peace plan, also known as, the “Deal of the Century”, and after reviewing the reactions of all concerned parties on the matter, we, Patriarchs and Heads of the Holy Land Churches, affirm our strong devotion to achieving a just and comprehensive peace in the Middle East based on the international legitimacy and the relevant UN resolutions and in a manner that guarantees security, peace, freedom and dignity to all of the peoples of the region.
The American peace plan that was announced yesterday in the White House in the presence of the Israelis and the absence of the Palestinians, invites us to request from the U.S. administration as well as the international community to build on the vision of two states and develop it in line with international legitimacy, in addition to opening a political communication channel with the Palestine Liberation Organization, the internationally recognized sole legitimate representative of the Palestinian people, to ensure that its legitimate national aspirations are also satisfied within the framework of a comprehensive and durable peace plan to be accepted by all relevant parties. And on Jerusalem we refer again to our statement addressed to President Donald Trump on December 6, 2017, and recall our vision for the Holy City to be open and shared by the two peoples, Palestinians and Israelis, and for the three monotheistic religions and our confirmation to uphold the Hashemite custodianship over the Holy Sites. The Resurrection of our Lord from Jerusalem reminds us all of the sacrifices to ensure justice and peace in the Holy Land.
We also call upon all Palestinian political parties, factions, and leaders to meet to discuss all disputes, end the state of internal conflict, terminate division, and adopt a unified stand towards concluding the state building based on plurality and democratic values.
Jerusalem, January 30, 2020
Patriarchs and Heads of Churches in Jerusalem
+Patriarch Theophilos III, Greek Orthodox Patriarchate
+Patriarch Nourhan Manougian, Armenian Apostolic Orthodox Patriarchate
+Archbishop Pierbattista Pizzaballa, Apostolic Administrator, Latin Patriarchate
+Fr. Francesco Patton, ofm, Custos of the Holy Land
+Archbishop Anba Antonious, Coptic Orthodox Patriarchate, Jerusalem
+Archbishop Gabriel Daho, Syrian Orthodox Patriarchate
+Archbishop Aba Embakob, Ethiopian Orthodox Patriarchate
+Archbishop Yaser Ayyash, Greek-Melkite-Catholic Patriarchate
+Archbishop Mosa El-Hage, Maronite Patriarchal Exarchate
+Archbishop Suheil Dawani, Episcopal Church of Jerusalem and the Middle East
+Bishop Ibrahim Sani Azar, Evangelical Lutheran Church in Jordan and the Holy Land
+Bishop Pierre Malki, Syrian Catholic Patriarchal Exarchate
+Most Rev. Krikor-Okosdinos Coussa, Armenian Catholic Patriarchal Exarchate
Full Text Source: https://www.lpj.org/

JERUSALEM – Please find below the statement that the Patriarchs and Heads of Local Churches sent to Mr. Donald Trump, President of the United States of America, in which they talked about the status of the Holy City of Jerusalem.
President Donald J. TrumpPresident of the United States of America
Dear Mr. President,
Jerusalem on December 6, 2017
We are fully aware and appreciative of how you are dedicating special attention to the status of Jerusalem in these days. We are following with attentiveness and we see that it is our duty to address this letter to Your Excellency. On July 17, 2000, we addressed a similar letter to the leaders who met in Camp David to decide the status of Jerusalem. They kindly took our letter into consideration. Today, Mr. President, we are confident that you too will take our viewpoint into consideration on the very important status of Jerusalem.
Our land is called to be a land of peace. Jerusalem, the city of God, is a city of peace for us and for the world. Unfortunately, though, our holy land with Jerusalem the Holy city, is today a land of conflict.
Those who love Jerusalem have every will to work and make it a land and a city of peace, life and dignity for all its inhabitants. The prayers of all believers in it—the three religions and two peoples who belong to this city—rise to God and ask for peace, as the Psalmist says: “Return to us, God Almighty! Look down from heaven and see!” (80.14). Inspire our leaders, and fill their minds and hearts with justice and peace.
Mr. President, we have been following, with concern, the reports about the possibility of changing how the United States understands and deals with the status of Jerusalem. We are certain that such steps will yield increased hatred, conflict, violence and suffering in Jerusalem and the Holy Land, moving us farther from the goal of unity and deeper toward destructive division. We ask from you Mr. President to help us all walk towards more love and a definitive peace, which cannot be reached without Jerusalem being for all.
Our solemn advice and plea is for the United States to continue recognizing the present international status of Jerusalem. Any sudden changes would cause irreparable harm. We are confident that, with strong support from our friends, Israelis and Palestinians can work towards negotiating a sustainable and just peace, benefiting all who long for the Holy City of Jerusalem to fulfil its destiny. The Holy City can be shared and fully enjoyed once a political process helps liberate the hearts of all people, that live within it, from the conditions of conflict and destructiveness that they are experiencing.
Christmas is upon us soon. It is a feast of peace. The Angels have sung in our sky: Glory to God in the highest, and peace on earth to the people of good will. In this coming Christmas, we plea for Jerusalem not to be deprived from peace, we ask you Mr. President to help us listen to the song of the angels. As the Christian leaders of Jerusalem, we invite you to walk with us in hope as we build a just, inclusive peace for all the peoples of this unique and Holy City.
With our best regards, and best wishes for a Merry Christmas.
+ Patriarchs and Heads of Churches in Jerusalem+Patriarch Theophilos III, Greek Orthodox Patriarchate+Patriarch Nourhan Manougian, Armenian Apostolic Orthodox Patriarchate+Archbishop Pierbattista Pizzaballa, Apostolic Administrator, Latin Patriarchate+Fr. Francesco Patton, ofm, Custos of the Holy Land+Archbishop Anba Antonious, Coptic Orthodox Patriarchate, Jerusalem+Archbishop Swerios Malki Murad, Syrian Orthodox Patriarchate+Archbishop Aba Embakob, Ethiopian Orthodox Patriarchate+Archbishop Joseph-Jules Zerey, Greek-Melkite-Catholic Patriarchate+Archbishop Mosa El-Hage, Maronite Patriarchal Exarchate+Archbishop Suheil Dawani, Episcopal Church of Jerusalem and the Middle East+Bishop Munib Younan, Evangelical Lutheran Church in Jordan and the Holy Land+Bishop Pierre Malki, Syrian Catholic Patriarchal Exarchate+Msgr. Georges Dankaye’, Armenian Catholic Patriarchal Exarchate
Posted by Jesus Caritas Est at 3:14 PM