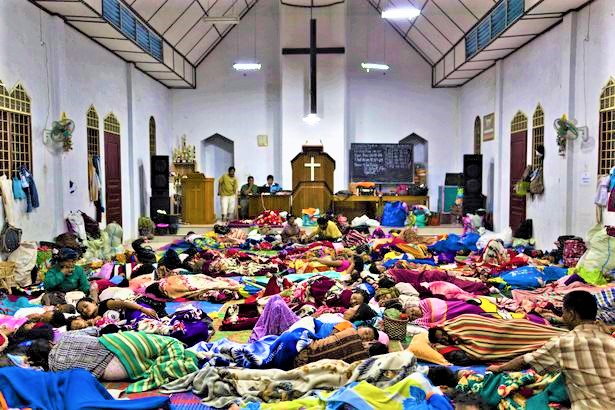 A volcano to the south of the Philippine capital of Manila spewed ash and steam for a second day and pushed out fountains of lava.

According to the Wall Street Journal, over 13,000 people have been evacuated from the area surrounding Taal Volcano, said Mark Timbal, as noted by a spokesman for the National Disaster Risk Reduction and Management Council.

The volcano, which is about 65 miles from Manila, “entered a period of intense unrest” Sunday, according to the Philippine Institute of Volcanology and Seismology, or Phivolcs. Strong winds carried ash to the capital city, where flights were disrupted, the stock market was closed and schools were suspended.

The Bishops' Conference of the Philippines noted on their website that Archbishop Gilbert Garcera of Lipa asked Catholics to join him in praying for the safety of everyone amidst the Taal volcano eruption on Sunday.
The archdiocese’s parish churches have opened their doors to evacuees as the volcano continued to increase its volcanic activity. The Society of the Divine Word (SVD) Seminary and other religious institutions are also accepting evacuees in Tagaytay City.  “Aside from prayers, we are appealing for donations in cash or in-kind for the archdiocese’s ongoing relief operations,” Garcera said over Radio Veritas.

Government volcanologists said Monday they would keep the alert level at four out of a possible five, which indicates a hazardous eruption may occur in a matter of hours or days.
Agenzia Fides noted the government ordered schools and public offices to close on January 13. The authorities also issued a public warning for the central Luzon region, which includes seven provinces: Aurora, Bataan, Bulacan, Nueva Ecija, Pampanga, Tarlac and Zambales, on the central island of Luzon. The alarm also applies to the Calabarzon region which includes five provinces: Cavite, Laguna, Batangas, Rizal, Quezon and Lucena, in addition to the Metro Manila region.
The Philippine Institute of Volcanology and Seismology raised the alarm level for the Taal Volcano to level four (out of five), stating that "a dangerous explosive eruption is possible in a few hours or days".
The Institute warned that the eruption could cause a "volcanic tsunami" and advised neighboring communities to take precautions against possible waves from the lake surrounding the volcano. The government advised people to stay indoors for health reasons because, following the eruption, the ashes are very harmful to health, containing particles with carbon dioxide, sulfur dioxide, fluorine, hydrochloric acid.
The Philippine archipelago is located on the so-called "ring of fire" of the Pacific, where tectonic plates collide, causing earthquakes and regular volcanic activity. In January 2018, tens of thousands of people were evacuated due to an eruption of Mont Mayon, in the central region of Bicol. The last eruption of the Taal dates back to 1977.
Edited from WSJ- Agenzia Fides - CBCP