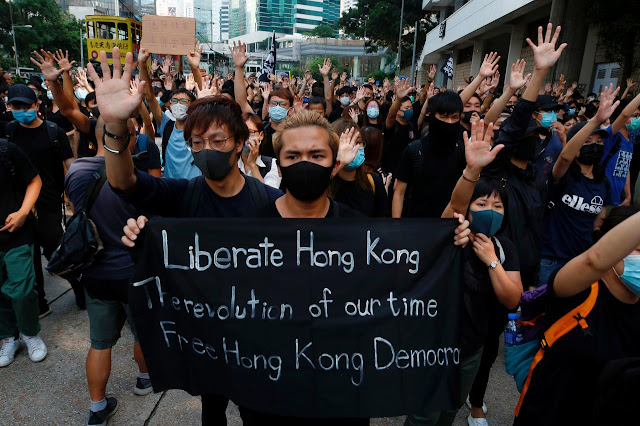 Clashes, arrests, tear gas at a gathering for universal suffrage
by Paul Wang
The meeting was organized by the Hong Kong Civil Assembly Team. Four policemen were injured; eight protesters arrested; the organizer, Ventus Lau, also arrested. The frustration with the request for universal suffrage expressed since 2007: "Has the government ever listened to us?". Clashes also in Mong Kok.


Hong Kong (AsiaNews) - A rally to demand universal suffrage in the territory ended quickly with clashes between radical demonstrators, the arrest of at least four people and use of tear gas.

The rally was organized by the Hong Kong Civil Assembly Team, whose spokesman is Ventus Lau, 25. The group had asked for a march from Victoria Park to Chater Garden, but police gave permission for a rally from 3pm to 4pm yesterday in Chater Garden.

Among the several thousand participants, four people were arrested before the conclusion because they possessed hammers and sticks and were suspected of wanting to wreak havoc.

At 4 p.m., when the police started chasing people to clear the area, two plainclothes policemen, mixed in the crowd, were beaten and injured. To save their comrades, riot police officers intervened with sticks, throwing tear gas and pepper sprays.

Law enforcement officials confirmed that four policemen were injured and four others were arrested for possession of improper weapons.

Ventus Lau was also arrested for not respecting the terms of the permit, which expired at 4pm. The police also accuse Lau of fomenting the crowd by revealing that there were plainclothes policemen among the people, triggering the manhunt.

Ventus Lau is accused of violating parliament on July 1 and is free on bail. In all likelihood, the new charge and arrest will make his situation worse.

The demonstration called for electoral reforms in view of the parliamentary elections next September, pushing for ever greater universal suffrage. Of the 60 seats in Hong Kong's parliament, only half are subject to elections from the base; the rest are occupied by representatives of the corporations (functional constituencies) or by persons appointed by the executive. For decades, the people of Hong Kong have been calling for all seats to be elected.

“We have had a lot of peaceful demonstrations ... but has the government ever listened?...“We’re not just here to protest today. We’re here to revolt, to exact revenge [for government inaction]".

There were other incidents in Mong Kok yesterday evening. A group of young people dressed in black tried to block the road. The police in riot gear intervened with Tasers and pepper spray, blocking and also hitting some journalists and volunteers for medical emergencies.
Full Text Source: AsiaNewsIT - Google Image of HK protests
Posted by Jesus Caritas Est at 1:55 PM