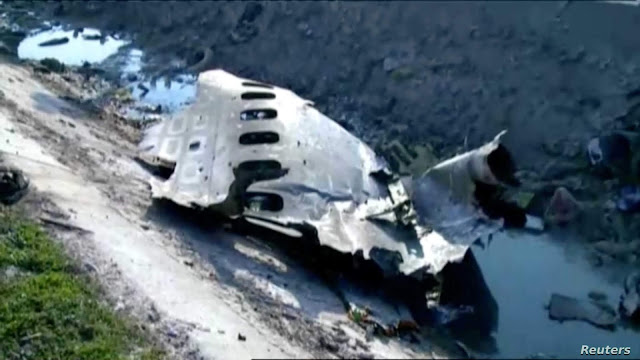 A Ukraine Plane flying from Tehran to Kyiv has crashed. Flight PS752 carrying 167 passengers, 9 crew unknown, went down minutes after takeoff, killing all on board.
Airline says preliminary data suggests there were 167 passengers and 9 crew members on flight.

The crash came hours after Iran launched a ballistic missile attack on Iraqi bases housing U.S. soldiers, but Iranian officials said they suspected a mechanical issue brought down the 3½-year-old Boeing 737-800 aircraft. Ukrainian officials initially agreed, but later backed away and declined to offer a cause while the investigation is ongoing. Thus, the cause of the crash unclear.
Ukrainian Foreign Affairs Minister Vadym Prystaiko said 82 Iranians, 63 Canadians and 11 Ukrainians were on board — the Ukrainian nationals included two passengers and the nine crew. There were also 10 Swedish, four Afghan, three German and three British nationals, he said.


Pope Francis has sent a message of condolence to all those who lost loved ones following an air crash in Tehran, Iran.  In the message, signed by Vatican Secretary of State, Cardinal Pietro Parolin, Pope Francis “commends the souls of the deceased to the merciful love of the Almighty, and he sends condolences to the families and friends of those who have lost their lives”. The Pope also invokes God’s blessings of strength and peace upon all affected by the tragedy.
François-Philippe Champagne, Canada's minister of foreign affairs, on Wednesday expressed his condolences to the victims and said he has been in touch with the Ukrainian government.

Tragic news regarding Ukraine International Airlines Flight 752. Our hearts are with the loved ones of the victims, including many Canadians. I have been in touch with the government of Ukraine. We will continue to keep Canadians informed as the situation evolves. #PS752

Ukraine International Airlines said it had indefinitely suspended flights to Tehran after the crash.

"It was one of the best planes we had, with an amazing, reliable crew," Yevhen Dykhne, the airline's president, said at a briefing following the crash.

The airline said it indefinitely suspended flights to Tehran after the crash.

Within hours of the missile strikes, the Federal Aviation Administration barred U.S. carriers from airspace over Iran, the Gulf of Oman, and the waters between Iran and Saudi Arabia, citing "heightened military activities and increased political tensions in the Middle East, which present an inadvertent risk to U.S. civil aviation operations."

Edited from CBC.ca News
Posted by Jesus Caritas Est at 9:03 AM