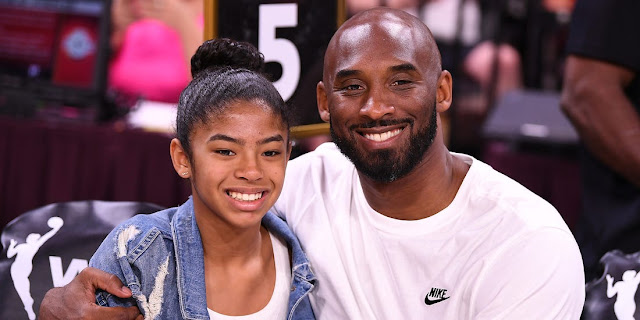 Kobe Bryant, 41, the basketball star, who spent 20 years with the Lakers, was killed on Sunday, January 26, 2020 when the helicopter he was traveling in crashed amid foggy conditions and burst into flames. His daughter Gianna, 13, was also on board,  nine people were on the copter — a pilot and eight passengers. Kobe and his family were practicing Catholics in an article he said:
I’m Catholic, I grew up Catholic, my kids are Catholic. It was noted that he was seen at Mass on Sunday before going on the helicopter. (see biography below)
Kobe is survived by his wife Vanessa. Together, they have four daughters -- Gianna, Natalia and Bianca and their newborn Capri. Kobe and Vanessa got married in 2001 after meeting in 1999.

LA Times reports that Christina Mauser, Kobe’s top assistant coach on the travel basketball team, was also killed in the crash.“My kids and I are devastated,” her husband, Matt Mauser, wrote on Facebook. “We lost our beautiful wife and mom today in a helicopter crash.” Also, baseball coach John Altobelli was among the others who died in the crash. Altobelli’s wife, Keri Altobelli, and their 13-year-old daughter, Alyssa, who played on the club team with Bryant’s daughter, were also among the victims, according to his family.

Short Biography of Kobe:
Kobe Bean Bryant (born August 23, 1978) is an American professional basketball player who has retired from the Los Angeles Lakers of the National Basketball Association (NBA). He entered the NBA from high school, and has played for the Lakers his entire career. He is the son of former NBA player Joe Bryant.  He has won the All-Star MVP Award four times (2002, 2007, 2009, and 2011). In 2003, Bryant was accused of sexual assault in Colorado, but the charges were eventually dropped, and a civil suit was settled out of court. Bryant admitted that he had an adulterous encounter, but denied the rape allegations. He did apologize publicly: Although I truly believe this encounter between us was consensual, I recognize now that she did not and does not view this incident the same way I did.
At the 2008 and 2012 Summer Olympics, he won gold medals as a member of the U.S. national team. Bryant was born in Philadelphia, Pennsylvania, as the youngest of three children and the only son of Joe Bryant and Pamela Cox Bryant. Bryant was raised Roman Catholic. When Bryant was six, his father left the NBA and moved his family to Rieti in Italy to play professional basketball. Bryant learned to speak fluent Italian. Bryant started playing basketball when he was 3 years old. When Joe Bryant retired from playing basketball in 1991, the Bryant family moved back to the United States. Kobe married Vanessa Laine in 2001. The Bryants' first child, a daughter named Natalia Diamante Bryant, was born in 2003.  Their second daughter, Gianna Maria-Onore Bryant, was born in 2006. In early December 2016, Vanessa gave birth to their third daughter, Bianca. The Bryants fourth daughter, Capri was born in June 2019. Kobe Bryant is Catholic, and turned to a priest when caught due to his sinful relationship. 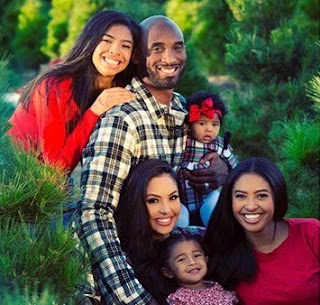 In a article from GQ Kobe states:

“I started to consider the mortality of what I was doing,” he says. At the time, he was 24. “What’s important? What’s not important? What does it mean when everybody loves you, and then everybody hates your guts for something they think you did? So that’s when I decided that—if people were going to like me or not like me—it was going to be for who I actually was. To hell with all that plain vanilla shit, just to get endorsement deals. Those are superficial, anyway. I don’t enjoy doing them, anyway. I’ll just show people who I actually am…. The [loss of the] endorsements were really the least of my concerns. Was I afraid of going to jail? Yes. It was twenty-five to life, man. I was terrified. The one thing that really helped me during that process—I’m Catholic, I grew up Catholic, my kids are Catholic—was talking to a priest. It was actually kind of funny: He looks at me and says, ‘Did you do it?’ And I say, ‘Of course not.’ Then he asks, ‘Do you have a good lawyer?’ And I’m like, ‘Uh, yeah, he’s phenomenal.’ So then he just said, ‘Let it go. Move on. God’s not going to give you anything you can’t handle, and it’s in his hands now. This is something you can’t control. So let it go.’ And that was the turning point.” (All Images Shared from Google Images) (Information from GQ and Wikipedia)