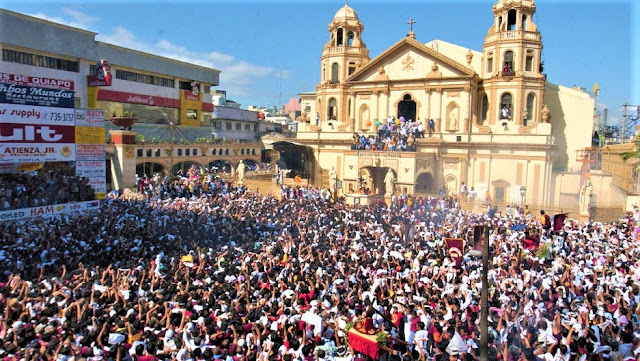 Asia News IT report: Manila, millions flock to Black Nazarene. Card. Tagle: 'Peace in the Middle East'
The traditional translation of sacred sculpture concludes a novena. Tensions between the United States and Iran are mounting. The archbishop of Manila: "The mission of the love of Jesus is also our mission". Over 12 thousand policemen guarantee the safety of the procession.

Manila (AsiaNews / Agencies) – “Let us pray for the safety of our fellowmen in the Middle East, to dispel the desire to destroy one’s neighbor, to dispel the desire to take vengeance ". This is the appeal from Card. Luis Antonio Gokim Tagle, Archbishop of Manila and newly appointed prefect of the Congregation for the Evangelization of Peoples, as he addressed thousands of Catholics during the mass celebrated before the traditional procession of the Black Nazarene, a centenary wooden statue of Christ.

Every year, the translation of the sacred sculpture from its original site - the church of St Nicholas of Tolentino - to the parish of Quiapo concludes a novena (31 December-9 January) and sees the participation of millions of faithful gathered in prayer, to seek a personal grace or miracle. According to the organizers, 4 million will take part today.

The Archbishop of Manila led thousands of devotees in prayer for peace, as tensions between the United States and Iran increased following the assassination of Iranian general Qasem Soleimani.

"Let us remember that in other parts of the world, the threat of violence is brewing and, hopefully, this will not lead to war," he said.

In particular, Card. Tagle asked those present to pray for Filipinos who risk being in the midst of the conflict, "let us pray for our fellow Filipinos and their families here who are anxious". During the homily, the cardinal asked the crowd for a moment of silence for peace in the Middle East. Following the crisis, the Philippine government ordered the evacuation of over 1,500 Filipino workers from Iraq.

Reflecting on the Gospel of the day, Card. Tagle asked Catholics to imitate the mission of Jesus Christ. “Jesus’ mission of love is also our mission. We should not let ourselves be the cause of danger and harm of our fellows,” he said.

“A real devotee of Jesus is the way of life and salvation. The success of love should start within us,” Tagle added.

Tonight's Mass for the Nazarene feast is seen as Tagle's last as Archbishop of Manila, a position he held for eight years. "“We will miss Cardinal Chito,” said Quiapo Church rector Monsignor Hernando Coronel, who presided over the Mass. “We lift you up, Cardinal Chito, to the kindness and goodness of Our Father Jesus Nazareno,” he said

Today's procession organizers expect the participation of up to 4 million people to join the procession, which usually ends late at night when the full-size statue of Christ reaches the popular neighborhood of Quiapo. To ensure safety, the authorities deployed more than 12,000 policemen, including bomb squads. However, the government has reassured that there is no specific threat. In addition to ensuring that the faithful remain safe in the huge crowd, the police also work to clear the streets in front of the platform on which the statue is placed, considerably slowing down the procession. The authorities also banned weapons, alcohol and stopped mobile phone services near the route.
Full Text Source: Asia News IT - Image Source: Google Images - Public Radio Int.
Posted by Jesus Caritas Est at 9:35 PM

Thank you for this article about Traslacion of the Black Nazarene of Quiapo Church 2020, Manila Philippines! More power to you & to CNW!