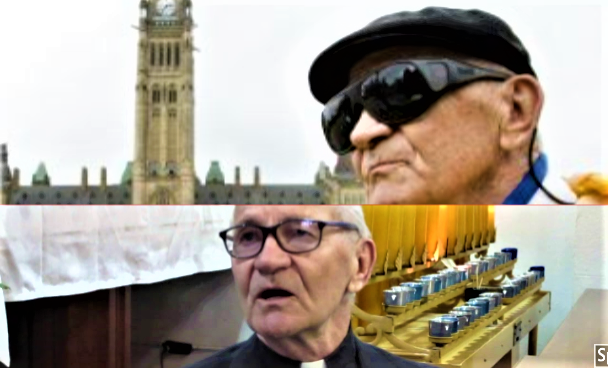 In addition to 51 years as a Catholic priest, Fr. Tony has engaged in a regular prayerful protest to oppose abortion and in support of life, on Parliament Hill, which he commenced in September of 1989. He has kept his faithful vigil for over 30 years.

Fr. Tony was arrested on October 24, 2018 for silently protesting within 50 metres of the Morgentaler abortion clinic in Ottawa. Fr. Van Hee never spoke with anyone. He did not distribute anything. He made no mention of abortion or abortion related services. Fr. Tony simply wore a sandwich board. On the front was the sentence, “The Primacy of Free Speech Cornerstone of Western Civilization”; on the back, “Without Free Speech the State is a Corpse.”


Fr. Tony was charged with violating section 3(1)(e)(iii) of the Safe Access to Abortion Services Act which states:

3 (1) While in an access zone established under section 6 for a clinic or facility, no person shall,
[…]
(e) for the purpose of dissuading a person from accessing abortion services,
[…]
(iii) intimidate or attempt to intimidate the person, or

The CCRL is involved in a constitutional challenge to the controversial bubble zone law, under which Fr. Tony is charged.

The Exner award was presented at the CCRL’s Annual Dinner on November 25 in Toronto at 6:30 pm at the Sala Caboto Ballroom at 40 Playfair Ave, west of Dufferin, south of Lawrence.

“We take this opportunity to recognize the persistent and prayerful witness of not only a Catholic priest, but an individual who has stood in silent support, no matter the weather or other impediments, to the cause of life.”

I have very little in common with Archbishop Adam Exner, but we were born 103 kms from each other. He was born in Killaly, Saskatchewan, in 1928, and I was born in Langenburg, Saskatchewan, in 1935. In the 2016 Census Killaly had a population of 77, Langenburg, a population of 1,165. However, I am honoured and humbled to receive the Archbishop Exner Award for Catholic Excellence in Public Life, and to be associated with the many much more worthy former recipients, such as, Doctors Catherine Ferrier, Robert Walley, Donald DeMarco, and Dr. and Mrs. Andrew and Joan Simone, Alex Schadenberg, Gwen Landolt, Fr. Alphonse de Valk, Michael O’Brien, Suzanne LaVallee, Jim Hughes, J. Fraser Field, and the late Frank Chauvin and Frederick W. Hill.