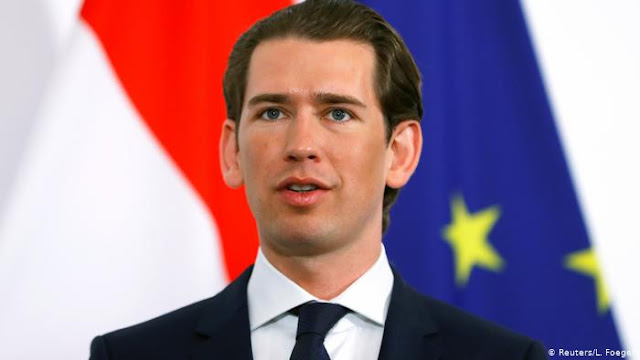 Sebastian Kurz has won Sunday's snap parliamentary election and has several options for a coalition that will give his conservative People's Party a stable majority, voting projections showed after the close of polls.

Conservative Sebastian Kurz was sworn in Tuesday, January 7, 2020 as Austria's chancellor after controversy over alleged corruption. The move meant a comeback from the collapse of his previous government. The 33-year-old, whose coalition with the far-right was ousted in June amid a scandal, has 38.4% of the vote — well ahead of the Social Democrats on 21.5%, the far-right Freedom Party on 17.3%, the Greens on 12.4% and the liberal Neos on 7.4%, according to Austria's Interior ministry.

The video showed Heinz-Christian Strache, the head of the country's far-right Freedom Party and Kurz' coalition partner, attempting to sell off state assets to a fake Russian oligarch.

Edited from EuroNews and VaticanNews
Posted by Jesus Caritas Est at 8:08 AM