Pakistan Cardinal Coutts says the World needs Peace and "...an end to war, conflicts, environmental decay and the moral and cultural decline ..." 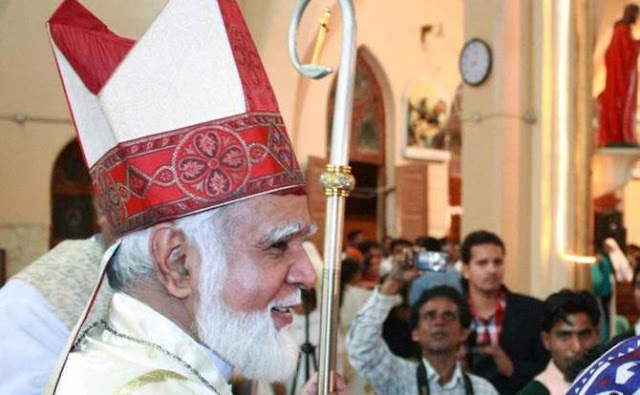 Card Coutts says the world needs peace makers in his message for 2020
by Shafique Khokhar
The cardinal follows Pope Francis's message for the 53rd World Peace Day. The archbishop of Karachi cites two events, namely the signing of the Document on human fraternity in Abu Dhabi, and the meeting between Pope Francis and the leaders of South Sudan, during which the pontiff kissed their feet.


Karachi (AsiaNews) – In his message for 2020, Card Joseph Coutts, archbishop of Karachi, said that the world needs makers.

In the Mass he led yesterday in Karachi’s St Patrick's Cathedral, the cardinal noted that Pope Francis described peace as a "journey of hope" based on "dialogue, reconsolidation and ecological conversion” in his message for the 53rd World Day of Peace.

As pontiff put it, “the world doesn't need empty words but peace makers who are often to a dialogue that rejects exclusion of manipulation. In fact, we cannot truly achieve peace without a convinced dialogue between men and women who seek the truth beyond ideologies and differing opinions. Peace “’must be built up continually’”.

Card Coutts went on to say that the world today needs everyone to live together as brothers and sisters and focus on the values of peace and "a culture of dialogue" to "bring an end to war, conflicts, environmental decay and the moral and cultural decline that the world is presently facing.”

For him, two events stand out indicating how the Pope showed with deeds that peace can be achieved. First, on 11 April, he met with the leaders of South Sudan. After kneeling before them he kissed their feet. Secondly, in February, he met the Grand Imam of Al-Azhar Ahmed el-Tayeb in Abu Dhabi and together they signed the historic Document on human fraternity.

All this reminds us that peace is possible if we are ready to reach out for it. We must work together and leave behind all the hatred in our hearts and join our hands and stand with each other. “Let's work for peace and love each other,” Card Coutts said.
Full Text Source: Asia News IT - Image Source: Google Images - Abouna.org
Posted by Jesus Caritas Est at 12:09 PM