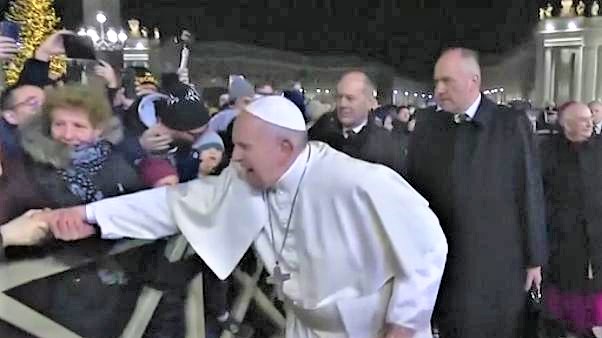 Pope Francis was visibly shaken and in pain after a woman grabbed his arm while he was turned around. The incident occurred on Dec. 31, 2019 after Pope Francis had finished greeted pilgrims and tourists in St. Peter's Square. The pope, in pain and upset, reprimanded this woman who had aggressively pulled his arm and slapped her hand, as seen in the video.  The Pope is 83 years old, and he suffers from back and leg pain. The video went viral and received many negative comment. At the Angelus prayer on Jan. 1, 2020 Pope Francis apologized for this gesture in which he said he lost his patience. Here is what he said, “Many times we lose our patience. I do too, and so I apologize for the bad example I set yesterday.” Also on Dec. 31, a few minutes before this episode which received so much attention, a little boy fell from the railing while he tried to greet the pope. Pope Francis realized this and didn't leave him until making sure the boy was completely fine. (edited from Romereports)
Posted by Jesus Caritas Est at 12:28 PM