Pope Francis explains "There is a very beautiful expression of Jesus that explains all this...“I desire mercy, and not sacrifice” in Homily 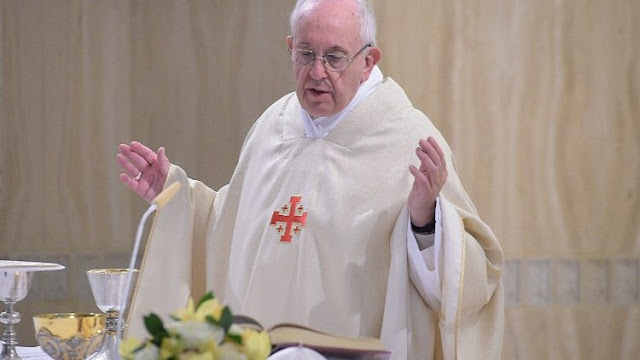 Pope at Mass: Trust in God makes us free
Trusting in the Word of God allows us to overcome idolatry, pride, and excessive self-confidence. In his homily on Monday during Mass at the Casa Santa Marta, Pope Francis said that being a “good Christian” means listening to what the Lord says about justice, charity, forgiveness, and mercy.
By Vatican News

In his homily at the daily Mass at the Casa Santa Marta, Pope Francis spoke about “docility” to the Word of God, which “is always new”. Reflecting on the first Reading, the Pope focused on God’s rejection of Saul as king, a “prophecy” that was confided to Samuel.

The stages of corruption
Pope Francis said that the essence of Saul’s sin was his “lack of docility” to the Word of God, imagining that his own “interpretation” of God’s command was “more correct”. The Lord had commanded the Israelites not to take anything from the people they had conquered, but they disobeyed. Pope Francis explained:

When Samuel goes to reject [Saul] on behalf of God, [Saul] tried to explain: “But look, there were cattle, there were so many good, fat animals, and with these I offered a sacrifice to the Lord”. He had not put anything in his own pocket, although others had. On the contrary, with this attitude of interpreting the Word of God as it seemed right to him, he allowed the others to put something of the plunder in their own pockets. The stages of corruption: it begins with a little disobedience, a lack of docility, and it keeps going further, further, further.

The lack of docility
After “exterminating” the Amalekites, Pope Francis said, the people took from the plunder “small and large beasts, the first fruits of what was vowed to extermination, to sacrifice to the Lord”. But Samuel pointed out that the Lord prefers “obedience to the voice” of God to holocausts and sacrifices; and he clarified the “hierarchy of values”: It is more important to have a “docile heart”, and “to obey”, than to “offer sacrifices, to fast, to do penance”. The “sin of lacking docility”, the Pope continued, lies precisely in that preference for “what I think and not what the Lord commands of me which I don’t understand”. When you rebel against “the will of the Lord”, he said, you are not docile; “it’s like a sin of fortune-telling”. It’s as if, although you say you believe in God, “you were to go to a fortune-teller to have your palm read ‘just in case’.” Refusing to obey the Lord, the lack of docility, the Pope repeated, is like “fortune-telling”.

When you insist on doing things your own way in the face the Lord’s will, you are an idolater, because you prefer what you think, that idol, to the will of the Lord. And for Saul, this disobedience cost him the kingdom: “Because you have rejected the Word of the Lord, the Lord has rejected you as king”. This should make us think a little bit about our own docility. We often prefer our own interpretation of the Gospel […] for example, when we fall into casuistry, into moral casuistry… This is not the will of the Lord. The will of the Lord is clear; He makes it known with the commandments in the Bible, and makes it known with the Holy Spirit within your heart. But when I am obstinate, and turn the Word of the Lord into an ideology, I am an idolater, I am not docile.

Mercy, not sacrifice
Turning to the day’s Gospel, from St Mark, Pope Francis recalled that the disciples were criticised “because they did not fast”. Jesus uses an analogy: no one sews new cloth on an old cloak, because it would risk making the tear worse; and no one puts new wine in old wineskins, because the skins would burst, and both the wine and the wineskins would be lost. “Rather”, the Lord said, “new wine is poured into fresh wineskins”.

Trust in God
The Pope said that being a “good Christian” means being “docile” to the Word of the Lord, listening to what the Lord says about justice, charity, forgiveness, and mercy; and not being “inconsistent in life”, using “an ideology to be able to go forward”. It’s true, he added, that the Word of the Lord sometimes “gets us in trouble”, but “the devil does the same thing”, “deceptively”. So to be a Christian, Pope Francis concluded, “is to be free,” through “trust” in God.
Full Text Source: VaticanNews.va
Posted by Jesus Caritas Est at 3:07 PM