Saint January 6 : Saint Charles of Sezze, O.F.M. who “By word and example he recalled in all the need of pursuing only that which is eternal” 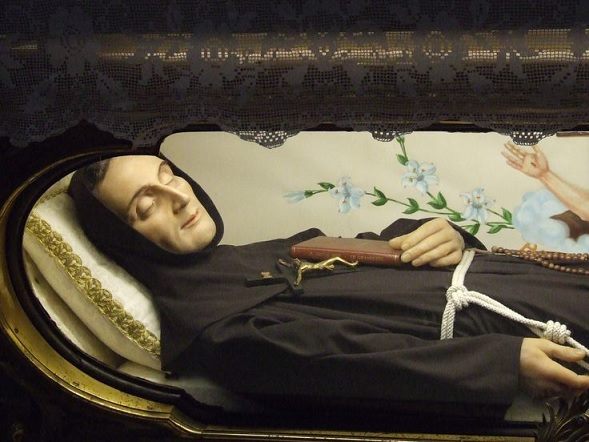 Saint Charles of Sezze's body is incorrupt (pic above).
Charles thought that God was calling him to be a missionary in India, but he never got there. God had something better for this 17th-century successor to Brother Juniper.

Born in Sezze, southeast of Rome, Charles was inspired by the lives of Salvator Horta and Paschal Baylon to become a Franciscan; he did that in 1635. Charles tells us in his autobiography, “Our Lord put in my heart a determination to become a lay brother with a great desire to be poor and to beg alms for his love.”

Charles served as cook, porter, sacristan, gardener and beggar at various friaries in Italy. In some ways, he was “an accident waiting to happen.” He once started a huge fire in the kitchen when the oil in which he was frying onions burst into flames.

One story shows how thoroughly Charles adopted the spirit of Saint Francis. The superior ordered Charles—then porter—to give food only to traveling friars who came to the door. Charles obeyed this direction; simultaneously the alms to the friars decreased. Charles convinced the superior the two facts were related. When the friars resumed giving goods to all who asked at the door, alms to the friars increased also.

At the direction of his confessor, Charles wrote his autobiography, The Grandeurs of the Mercies of God. He also wrote several other spiritual books. He made good use of his various spiritual directors throughout the years; they helped him discern which of Charles’ ideas or ambitions were from God. Charles himself was sought out for spiritual advice. The dying Pope Clement IX called Charles to his bedside for a blessing.

Charles had a firm sense of God’s providence. Father Severino Gori has said, “By word and example he recalled in all the need of pursuing only that which is eternal” (Leonard Perotti, St. Charles of Sezze: An Autobiography, page 215).

He died at San Francesco a Ripa in Rome and was buried there. Pope John XXIII canonized him in 1959.
Source:https://www.franciscanmedia.org/