Thousands of University Students in Phoenix learn Evangelization from FOCUS with Nuncio, a Cardinal, Matt Maher and more! - Video 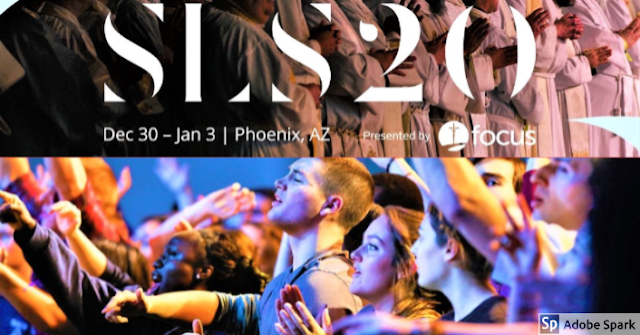 Trent Horn, originally from the Diocese of Phoenix, led a workshop titled “The Beginner’s Guide to Defending Your Faith,” at the FOCUS-sponsored Student Leadership Summit Dec. 31 at the Phoenix Convention Center.
“This is going to be the door to evangelize, to reach out to people in my parish and to say, ‘I know you’re broken, I know you’re not fine I know you’re a mess because I’m not fine, I’m broken and I’m a mess. I know where you’ve been because I’ve been where you’ve been,’” an attendee said , referencing a keynote address from Fr. Mike Schmitz the night before. “It allows a certain authenticity to evangelize.”

The summit is sponsored by FOCUS, or the Fellowship of Catholic University Students. This year, SLS offered a track for non-students called “Making Missionary Disciples.”

Also, Archbishop Christopher Pierre, apostolic nuncio to the United States, set the tone for the first full day at SLS Dec. 31, stressing in his homily to the “army of soldiers” in the congregation that the light of Jesus overcomes darkness and we are called to spread Christ’s light.


“Go forth to testify the true light of the world,”
Archbishop Pierre said.

Cardinal Gerhard Mueller from Germany gave a talk on Jan. 1. speaking of the poison of relativizing the Faith. One of FOCUS’s first missionaries, John Zimmer, delivered a talk to students, about incarnational evangelization. He explained that evangelization is like watching a good movie that we can’t wait to tell people about.

“Nobody is going to coach you on how to share a good movie with your friends. It comes naturally, and what we have in the Gospel message is far better than any movie,” said Zimmer.


Thousands knelt in Adoration of the Blessed Sacrament following a New Year’s Eve party at the FOCUS-sponsored Student Leadership Summit in the early morning of Jan. 1 at the Phoenix Convention Center.
A great talked entitled The Gaze That Beckons: Following Jesus Wholeheartedly was given by Sr. Bethany Madonna, S.V.

In the afternoon, conference attendees had the choice of attending several talks, one of them being Emily Wilson’s, “When Will my Vocation Begin?” (see Video above 32:24)

Wilson, herself an ASU alumnus, offered practical tips that individuals can implement if the Lord hasn’t revealed their vocation to them yet. She encouraged attendees to look to Mary, who was always receiving love and graces from the Lord, for inspiration. Wilson stressed that a time without knowing your vocation is not a time of waiting. Catholic recording artist and Dove-Award winner Matt Maher, who began his music ministry at St. Timothy Parish in Mesa, led a crowd of thousands in worship as balloons fall at the stroke of midnight at a New Year’s Eve party at the FOCUS-sponsored Student Leadership Summit Dec. 31 at the Phoenix Convention Center.
Dr. Edward Sri, one of the co-founders of FOCUS, and Damon Owen, executive director of the JoyToB ministry, wrapped up the evening by delving into the topic of authentic friendship. Sri spoke to the hearts of this generation by encouraging everyone to go on a social media fast in order to be more rooted in face-to-face friendship.

Finally, attendees spent their last moments of 2019 with Catholic recording artist and Dove Award-winner Matt Maher — who began his music ministry at St. Timothy Parish in Mesa, singing songs of praise to the Lord as they spent their first moments of 2020 with Jesus in Adoration.
Edited from the CatholicSUN