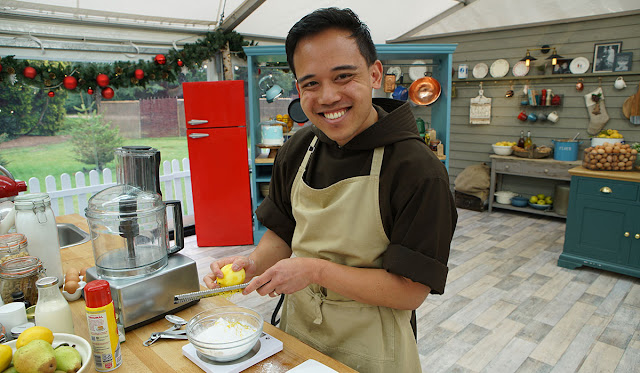 Capuchin Franciscan Brother Andrew Corriente, a 31-year-old third-year seminarian was the winner of the fifth season of ABC’s “The Great American Baking Show: Holiday Edition,” where he was recognized as one of the nation’s best amateur bakers.
It is in the Capuchin College in Washington that Brother Andrew creates treats for the men who call the friary home.

Brother Andrew knows his way around a kitchen. In fact, he was crowned this year’s baking champion on ABC’s “The Great American Baking Show: Holiday Edition.” The program, which aired during the month of December and concluded Jan. 2, is an adaptation of the wildly popular “Great British Bake Off.”


The show is in its fifth season, features 10 amateur bakers who compete in a series of challenges in which they must produce outstanding baked goods. Contestants are eliminated one by one until a champion is selected.

He earned the crown with chocolate cookies with lime cream and blackberry jam, sponge cakes with fresh cream and fruits, and a puff pastry.


“In 2018, they (producers of the show) called me, but I said no because I was taking my final vows,” he told the Catholic Standard, newspaper of the Archdiocese of Washington. “They called me again this year, and I did it.”


Brother Andrew chose to wear his distinctive brown Capuchin robes as he baked.

The friary where Brother Andrew regularly creates his bakery masterpieces is part of the St. Augustine Province of the Order of Friars Minor. The 30 men who live at Capuchin College are either studying nearby at The Catholic University of America, preparing for the priesthood, serving in various ministries throughout the Archdiocese of Washington or are retired.


Capuchin Franciscan Father Paul Dressler, the province’s guardian and director of formation at Capuchin College, said, “Brother Andrew wanted to be on the show as a witness. He went to evangelize and put before the world the Gospel and our order.”


Brother Andrew is a third-year seminarian. After studying filmmaking in college, the now 31-year-old native of California, “had a desk job in the entertainment industry,” working for a talent agent.

“I was searching for other jobs, but never thought about religious life,” he said. “A friend of mine from college became a nun, and when I went to see her profess her vows, I met a Capuchin.” That spurred Brother Andrew to give the order a try. “I met the guys, and the rest is history,” he said.

Baking, he said, “is in a way eucharistic.”

“Jesus gave us himself in the bread and wine,” Brother Andrew said.

“FOR ME, I PUT MYSELF OUT THERE WITH MY COOKING. IT IS KIND OF A SACRIFICIAL LOVE.”


Brother Andrew said he finds time for prayer as he cooks. For example, in preparing meringue — a confection made of whipped egg whites and sugar — he discovered “the best way to time my stirring is by praying the Hail Mary.”


The residents of the friary would gather each week to watch the show together, cheering their brother on. Father Dressler said it was akin to watching the Super Bowl.

In addition to his baking, Brother Andrew uses his culinary skills to help the less fortunate and the working poor. He and a group of brothers and lay volunteers cook and serve dinner every Sunday for the day labourers who congregate at a local Home Depot looking for work.

Edited from a Story by Richard Szczepanowski for CNS
Posted by Jesus Caritas Est at 9:02 AM